Steven Spielberg’s latest movie “Ready Player One” is certainly a crowd-pleaser if we are to go off the reactions of the audience in attendance. As many critics have pointed out, however, that exuberance relies solely on the various IPs and meta-references that take center-stage in the adaptation of Ernest Cline’s novel of the same name. Does that inherently make this a bad movie, devoid of emotion and originality?

Not in the least. In fact, the references to 80s, 90s, and 00s pop culture is what made the book such a fascinating read. Like the Oasis within the film, the book was an escape for readers where, within the pages, they could live out some of their own favorite movies, video games, and TV shows.

The film does depart from the source material only superficially. The overall story remains unchanged. A trillionaire software creator named James Halliday (Mark Rylance) hides an Easter egg within his greatest creation, a VR world called the Oasis. After his death, he challenges the gamers participating in his creation to find the egg in order to inherit his fortune and full control of the Oasis. An evil corporation wants to take control of the Oasis in order to use its vast user-base to turn a profit. “Gunters” are those who enjoy the thrill of the hunt and want the Oasis to remain an open-access program where anyone can escape their realities. The clues to the egg? All hidden within Halliday’s favorite things and life experiences. The gunters need to interpret his life, his regrets, and his passions in order to find the prize.

For viewers invested, this is an immersive experience. The sheer amount of allusions, cameos, and direct references allow the viewer to almost join in as a gunter, where each viewing will unveil new hints and clues as to the mindset of the filmmakers. Granted there isn’t a half a trillion dollar prize on the line for the audience who catch the most “Easter eggs,” but it certainly is a shrewd move by Spielberg to ensure repeat viewings.

As a film, however, it is not Spielberg’s best. Pacing is strong but so much time is spent in the Oasis that the flesh and blood characters aren’t given a chance to grow until near the third act. This is a shame as supporting actors Lena Waithe and Simon Pegg shine in the brief instances they have. Rylance also is brilliant as eccentric Halliday. The leads, however, struggle to bring any weight to their characters. Tye Sheridan as Wade or his avatar Parzival and Ben Mendelsohn as baddie Sorrento both fail to bring any life into their roles. Mendelsohn in particular falls flat as the sinister character that is portrayed in the book. Instead, his character is treated like a joke; a spoiled brat who gets what he wants without getting his hands dirty. This alone fails to add a sense of urgency to the quest and Parzival’s struggle. 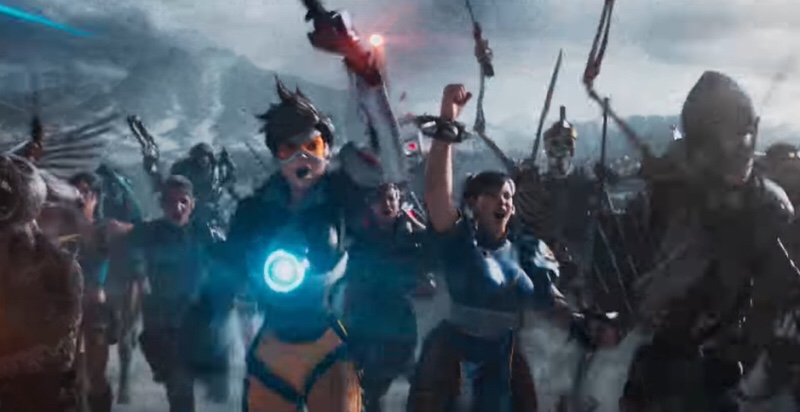 Then there is the CGI. Yes, the entire movie unfolds like the cut-scene from a b-grade video game. But guess what. That’s okay. When the entire film takes place within a clearly established digital world, it makes sense that everything would be computer generated. Where the movie stumbles though is in the fact that the CGI itself almost pays homage to the same films it depicts; it’s not cutting edge imagery. The story takes place in 2045. In 2018 we already have video games with more photo-real visuals than what’s seen here. This is perhaps the biggest missed opportunity. The film had the potential to be one of the most strikingly beautiful films ever in that the worlds created within the Oasis could be as beautiful as Peter Jackson’s Middle Earth or as desolate as George Miller’s Mad Max: Fury Road. Instead everything is a glossed over menagerie of IPs.

Ultimately, Ready Player One is a fun experience but not a great film. There are missed opportunities but I suspect that for most that will not hurt the overall enjoyment of the movie. Spielberg hasn’t lost his touch as a filmmaker but seeing the homages to the time period where he shined certainly set a high bar that goes unsurpassed in this adaptation.