The rise of Judd Apatow in the early 2000s changed comedy. From “Freaks and Geeks” to “Undeclared,” and eventually “The 40-Year-Old-Virgin,” Apatow’s humor and style redefined comedic filmmaking. However, while Apatow himself may have some faults as a filmmaker (seriously, why are his movies so long), his proteges created some of the lasting work of the decade. This won’t be the only film featuring an Apatow regular (Jason Siegel starred in “Geeks” and “Knocked Up“), but it was the first to release in 2008. “Forgetting Sarah Marshall” is not only one of the comedy goldmines of the past decade. It’s probably its best romantic comedy as well. 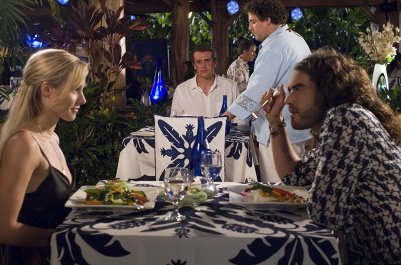 The film follows Peter Bretter (Jason Siegel), a man desperately trying to forget his celebrity girlfriend Sarah Marshall (Kristen Bell). Based on his brother-in-law’s (Bill Hader) advice, Peter goes to Hawaii for a vacation. Unfortunately for Peter, Sarah is at the same resort with her new boyfriend and famous rock musician Aldous Snow (Russell Brand). Over the rest of his vacation, Peter interacts with other guests (Jack McBrayer) and the employees of the hotel (Paul Rudd, Jonah Hill, Taylor Wily). As he begins to fall for the hostess of the hotel, Rachel (Mila Kunis), Peter begins to contemplate if he was ever actually happy with Sarah.

The Moment I Fell in Love With “Forgetting Sarah Marshall”

After the amazing breakup scene, featuring a full frontal nudity from Siegel, we’re treated to a montage of Peter trying to get over Sarah Marshall. In the scenes, Bill Hader plays his wingman and does so rather awkwardly. The scenes with the women reinforce the awkwardness that Peter feels with all women. This plays extremely well with Siegel’s comedic persona. The best of the scenes comes when Peter plays the music for Sarah’s crime procedural. The CSI/Law and Order ripoff needs dramatic music for a dramatic scene. Yet Peter plays hilarious music, either going too far or too light. The scene culminates in him throwing a music stand through a screen, cementing his frustration with Sarah and the actual terribleness of the show.

When Peter first arrives in Hawaii, he immediately takes to the bar. He flips on the TV, and of course, Sarah Marshall is front and center. He drinks an entire bottle of alcohol while watching the show, only to step onto the porch and ugly cry. He receives a call from Rachel at the front desk, who says she’s been getting complaints from the other guests that a woman is crying and disturbing their vacation. We cut to Rachel, looking like she feels sorry for Peter. We then immediately return to Peter, who has continued his crying and dropped to the fetal position on the floor.

Best Moment in the Film

When Rachel signs Peter up for the open mic night. Peter is dreading playing his Dracula musical, but with Rachel’s taunts, he pushes through. The seriousness with which he takes the stage is charming. Yet when we hear the lyrics to the insane puppet musical, the scene turns from a genuine display of talent to pure hilarity. Watching the audience reaction is amazing, as dozens of locals try to figure out whether this is a bit or a serious attempt.

Perhaps most important, Kunis’ laugh snaps things into focus for Siegel. This is a comedy, not a drama. The idea also snaps into place for the film as a whole, with the absurdity of subsequent scenes only goes higher and higher from this moment. It also leads to the payoff at the end of the film, when Peter puts on the show with puppets. This scene is so good, it actually netted Siegel and director Nicholas Stoller the deal to reboot “The Muppets” in 2011. 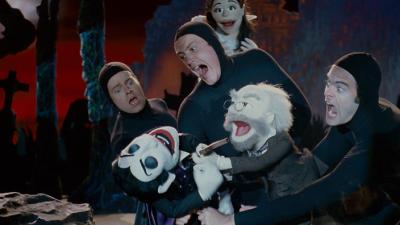 This film may not always feel like it, but it is a traditional romantic comedy in many ways. The girl falls in love with the boy. The boy doesn’t realize he loves her. The boy does something dumb, making the audience hate the boy. The boy wins the girl’s heart at the end of the film. This is a tried and true method that can be applied to everything from “Sixteen Candles” to “When Harry Met Sally” and many more. Yet what is most unique here is the style of comedy used. This film is far more raunchy than many romcoms, which often contain conservative views of romance. There are graphic sex scenes, profanity, and (again) full frontal male nudity. Yet despite all these aspects, no romantic comedies in the last 10 years really measure up. “Forgetting Sarah Marshall” may be the last great romcom until “The Big Sick” released last year.

If that doesn’t do it for you, this film is the perfect crossroads of careers. This is Siegel’s breakout performance, showcasing his ability to be a leading man. He had been on “How I Met Your Mother“, but was often playing 3rd fiddle to the Ted Mosby and Barney show. Mila Kunis was transitioning out of the sitcom world as well, and “Sarah Marshall” was her first big role. Jonah Hill is on the assent, coming off of “Superbad,” but still not famous enough to be distracting. Paul Rudd was still down for anything, and wouldn’t be a superhero for another 8 or so years. Kristen Bell would be stuck as the voice of “Gossip Girl” for some time.  She would struggle to be in another good movie until “Frozen” in 2013.  We also had a national obsession with Russell Brand for about 5 years, and this was probably the reason for it. If I haven’t convinced you otherwise to watch this film, remember it is a time capsule to showcase some of the biggest stars of today.

What do you think of “Forgetting Sarah Marshall?” Give us some of your lasting impressions in the comments below!