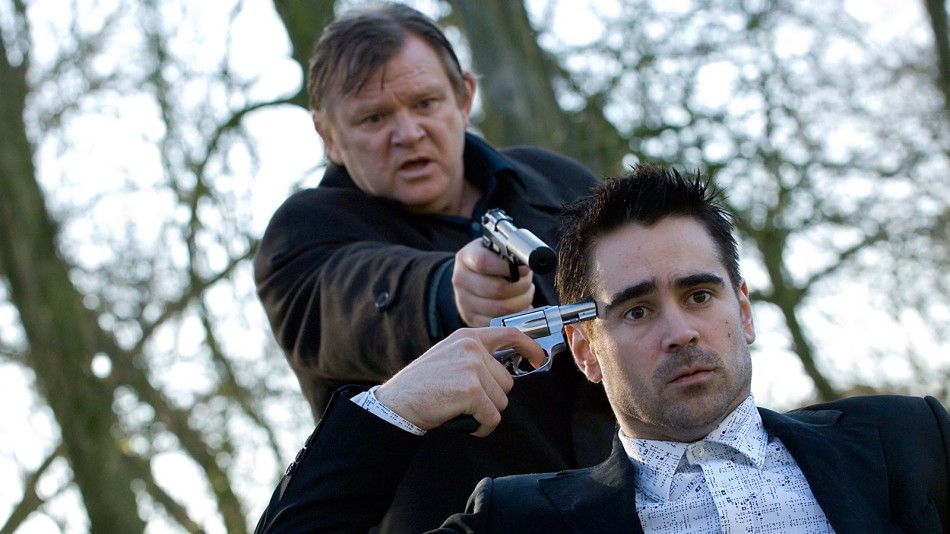 Dark comedies rarely get their due. Yet director Martin McDonagh has found a way to break through the bias. McDonagh releases extremely dark comedies that feature death, violence, and cursing. I mean, Grade-A, making a sailor embarrassed of himself level cursing.  What makes McDonagh’s feature debut stand out from the crowd is the depth at which his characters are written. While his Oscar hit “Three Billboards Outside Ebbing, Missouri” struggled with too many characters, “In Bruges” does not have those issues. The result is a character study with weighty performances from some of our most underappreciated actors. In other words, it’s brilliant.

“In Bruges” follows hitman Ray (Colin Farrell) and his handler Ken (Brendan Gleeson) as they are sent to a small Belgian town. Ray’s last job went bad, and despite killing his target, left devastating collateral damage. Ray and Ken have been banished away by their boss Harry (Ralph Fiennes) to an idyllic town away from the scene of the crime. The only problem is, there’s nothing to see in Bruges. Except maybe a Dwarf making a movie.

The Moment I Fell in Love with “In Bruges”

The film has many moments that are fun to enjoy. McDonagh’s script gives his characters the ability to curse freely and showcase their adept use of language. It is a very funny script that would likely make me love the movie. However, the scene that keeps this film in my Top-5 of the year is one given to Ken in a hotel room. Ken receives a call from Harry, who has asked them to stay in the room. Ray is out on the town with a young local who has agreed to go on a date with him.

The setup for the scene gives Gleeson a chance to showcase his acting chops. He’s funny throughout the scene, essentially given that he’s monologuing to a phone. Gleeson makes up a story for Harry, telling him about how much Ray loves Bruges (he doesn’t). He relishes the small details, surprising himself with his ability to craft such a compelling narrative out of thin air. This makes it all the more upsetting when Harry’s orders hit him. Ken is to kill Ray after all.  What makes the scene more impressive is that it appears to be one take. Gleeson gets the acting showcase here, and really proves what a talented and underappreciated acting he’s been.

There are a lot of them in this movie. Most of them are due to McDonagh’s ability to write crazy and ridiculous stories for his characters to spout. However, characters freaking out and breaking things is the best. Perhaps the best one in the film comes with the introduction of Fiennes to the movie. Fiennes throws the phone through the office, even onto the ground. However, he’s not done with it, picking the phone back up and continuing to beat it into his desk. While the clip below doesn’t feature the whole scene, it features the best part. Personally, I think you should watch through the apology to his wife, but hey, I’ll take what I can get.

If you want McDonagh at full insult mode though, take a gander here.

This comes towards the very end of the feature. Gleeson gets another showcase moment with Fiennes as they have a  tête-à-tête. Each comes into the moment with a moral philosophy. Fiennes is honor above all else. Gleeson believes in second chances. The two concepts meet, and for a moment, all is forgiven. That is until it’s revealed that Ray is still in town. Fiennes, believing he’s been lied to shoots Gleeson in the neck and goes to kill Ray. In his final moments, Gleeson leaps from the roof of a tower, plummeting to his death. His final moment of sacrifice is to warn Ray, giving him the opportunity to escape. He sticks true to his loyalty to Ray and does so because he believes in the boy. It is heartwarming, if not one of the most violent scenes in the movie.

Why Should You Rewatch It/Watch If for the First Time

Based on everything written to this point, it would make sense if you believe I think that Gleeson is the standout actor in this film. He’s not, he just happens to be giving an all-time supporting performance as well. This film is brought to life by an unbelievable Colin Farrell performance.  Farrell is masterful as a broken man, haunted by what he’s done. He is pithy, snarky, and funny. He’s torn, broken, and emotionally crippled. This is a master performance and easily the best of his career. For a minute in the 2000s, we thought Farrell was an action star. He wasn’t. But he an excellent character actor. In recent years he’s turned up his want to be in prestige pictures, and its only a matter of time until he finds himself an Oscar role. Given how brilliant he is here, it will be a long overdue nomination.

What do you think of “In Bruges” 10 years later? Does it continue to hold up? Let us know in the comments