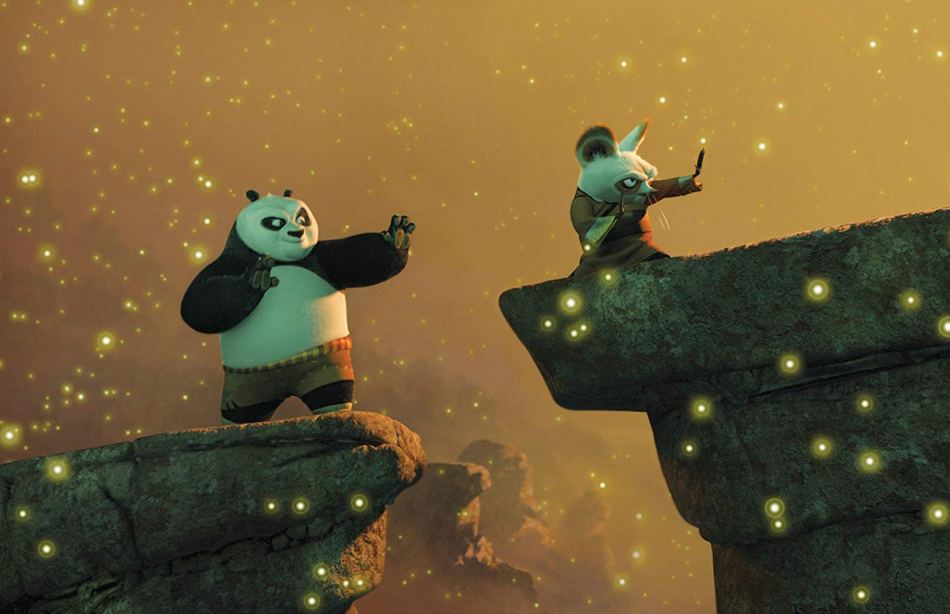 Some would argue that Jack Black is the greatest actor in kids movies. They’d be right. The comedian has always been excellent in movies geared for younger children. Whether it was the more kid-friendly “School of Rock” or the recent “Goosebumps” flick, Black puts 100% into every role. He’s a ball of pure energy, and when harnessed correctly, can really deliver. Black’s got a hidden vulnerability that he can utilize extremely well. No franchise showcases that more than his work in “Kung Fu Panda.”

“Kung Fu Panda” follows the story of Po, a Panda obsessed with the world of Kung Fu. He works for his adoptive father Mr. Ping (James Hong) serving noodles during the day. His idols are The Furious Five, made up of Tigress (Angelina Jolie), Monkey (Jackie Chan), Mantis (Seth Rogen), Viper (Lucy Liu), and Crane (David Cross). They are taught by Master Shifu (Dustin Hoffman) and Grand Master Oogway (Randall Duk Kim).

When Oogway has a vision that the evil Tai Lung (Ian McShane) will break out and go after the Dragon Scroll, the Shifu holds a tournament to identify the next Dragon Warrior. When Po goes to attend, he is chosen by Oogway to be the next warrior. The result is a topsy-turvy story comedy that holds a strong message about heart and dedication.

When I Fell in Love with “Kung Fu Panda”

The training montages between Po and Master Shifu are hilarious. The best one comes after Shifu discovers that Po can be extremely athletic when motivated by food. Po hilariously chases down the food from Shifu. For his part, Shifu pushes Po much further, realizing his own faults as a trainer. The subsequent scene features world-class animation and a very silly but strong use of the training. The sequence evokes Kung Fu movies of the 1970s and even shifts into a new animation to visually showcase the change in Po. It’s a very fun scene that also gets to the emotional core of the movie.

The Tai Lung escape is awesome. Throughout the entire scene, the camera continually showcases the grandiosity of it all. Tai Lung is a monster, easily outmaneuvering every creature that makes its move to stop him. He throws the others around, easily escaping their grasp. The use of sound during the scene is also expert, from the cracking of knuckles and joints to the roar of Tai Lungs to the breaking of chains. The choreography for Tai Lung is also excellent, showcasing the movie’s Kung Fu bonafides as well. The sequence is an awesome display of what animation can do for a character’s physicality and showcases why the story could only be told through animation.

When the Dragon Scroll is finally unveiled, the scroll is blank. The characters are pushed into depression, believing there’s no way to stop Tai Lung. Po returns to his father and the two have a conversation about soup. What could have become a ridiculous scene quickly turns into the moral of the film. As we find that there is no secret ingredient to soup, there is also no secret to being great at life. It’s a deeply important lesson that the film hinges on. It also transcends the film, making it an easy lesson to apply to yourself through the tough times.

Why You Should Rewatch “Kung Fu Panda”

This film represents one of the creative peaks of Dreamworks animation. It is rare for the animated studio that was meant to conquer Disney to actually put out movies that would live up. In this case, Dreamworks released a solid piece of family entertainment that still rings true today. The open-ended franchise could have gone on forever and still may. Yet this first film is one that prides itself on heart and love. It’s an exciting and all around fun movie. It’s a shame they don’t make them like this very often.

What do you think of “Kung Fu Panda” 10 years later? Does it continue to hold up? Let us know in the comments