The history of basketball movies is littered with both hilarious and awesome movies. Look no further than “Space Jam,” “White Men Can’t Jump,” “Hoosiers” or “He Got Game.” Each of those movies is awesome, each is ridiculous at times, but each is timeless. Basketball can be a beautiful game when played correctly, and when the directors and actors buy in, you can get something special.

So what happens when the film you’re watching is based on a character created for a Pepsi Max commercial? If you have the heart of the film, you can actually still get something worthwhile. “Uncle Drew” does just that and appreciates the game as more than just a sport. Instead, at the heart of “Uncle Drew” is the concept of what brings friends and communities together. Also, Kyrie Irving in old man makeup is pretty fantastic.

“Uncle Drew” follows Dax (Lil Rel Howery from “Get Out“) as he tries to win the legendary Rucker Classic. His girlfriend (Tiffany Haddish) is already counting on him to win to bring in some money, and his star player Casper Jones (Aaron Gordon) needs to get the recognition he deserves. Both leave Dax in favor of his longtime rival Mookie (Nick Kroll). As he tries to assemble a new team, Dax runs into Uncle Drew (Kyrie Irving), a septuagenarian streetball legend. Dax wants Drew to play for him, and Drew agrees under the condition that he picks the team. The two go across the country to gather up Drew’s old squad, including a pastor named Preacher (Chris Webber), the blind Lights (Reggie Miller), the wheelchair-bound Boots (Nate Robinson) and kung-fu teacher Big Fella (Shaquille O’Neal). 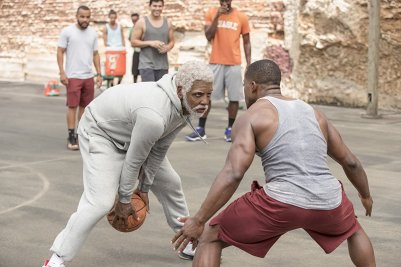 The movie is ridiculous and silly the whole way through, but its excellent at finding the funniest possible ways to tell its story. The plot is essentially a 30-minute “getting the gang back together” story, followed by some fun Rucker basketball. The stars are funny, and the team Drew is ridiculous. Shaq and Kyrie are great together, putting together very funny and heartfelt performances considering the two are basketball players. Kyrie is the best actor of the bunch and commits to the character on and off the court. Reggie Miller probably has the funniest lines of the movie, especially when discussing his vision. Chris Webber is very good as Preacher, but his character is overshadowed by his wife (Lisa Leslie). Leslie is the funniest of the players, toting a baseball bat to beat the hell out of Uncle Drew’s van. The characters come together well and help you buy in on this ridiculous story. 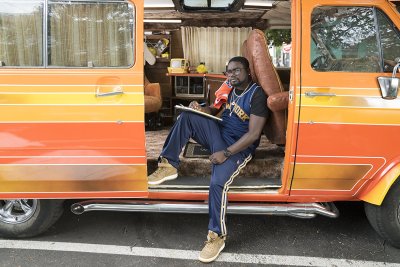 Side note, the makeup is amazing. I know my friends joke that I am too focused on awards work, but seriously, the old age makeup is insanely good. Adding liver spots, wrinkle makeup, wigs and bald caps helps makes the players almost unrecognizable in their roles. If this was done for a prestige picture, we’d be talking about an Oscar win. This level of craft is excellent, and considering the makeup branch has nominated “Click,” “Mrs. Doubtfire,” and “The Nutty Professor” in the past, don’t be shocked if you hear “Uncle Drew” called among the nominees. I’m not saying it’s going to happen, but I am saying it should. 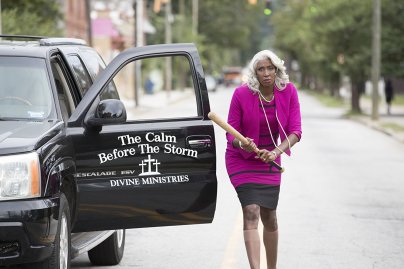 The movie does delve into some cliches in its runtime, making it easy to write it off. But if you’re game, this movie is an enjoyable summer comedy. While it doesn’t rise to the hysterics of a “White Chicks” or “Space Jam,” “Uncle Drew” is a solid summer comedy. Check it out if you have any interest in basketball, and enjoy the fun turns from the weird cast.

What do you think of “Uncle Drew?” Let us know in the comments below!

0 comments on “Summer Catch Up Review: ‘Uncle Drew’ is Inside Basketball But Funny”