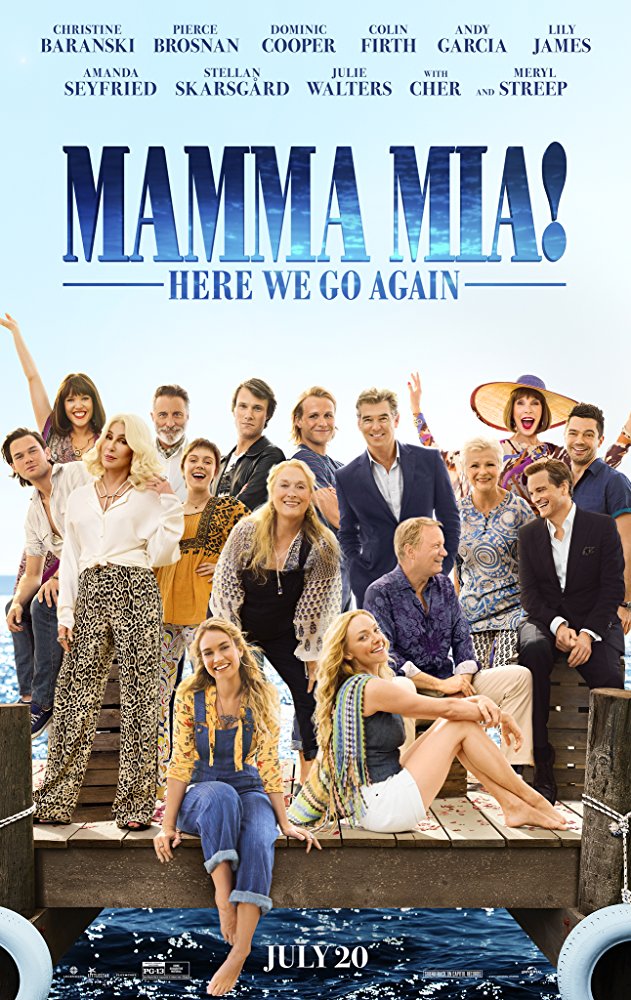 Something that I’ve honestly come to grips with in the past couple of years is that I unabashedly love musicals. When “The Book of Mormon” was making its way through Broadway, I began to pay attention to the genre. Just before then, Rachel and I had reembarked through the Disney classics, reminding me how much I loved the musicals of the Disney renaissance. I began watching them like crazy in college, coming into contact with “Little Shop of Horrors,” “The Producers” and “Singing in the Rain” for the first time. All of this taught me one thing: I was a repressed theater kid who didn’t realize until I was in my 20s. 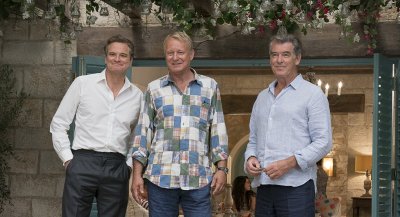 This weekend, I was able to take Rachel to the movies for the first time in a while. It was clear that there was one movie for us to check out, and that movie was a sequel to one of her all-time favorites. We held off on publishing an article about “Mamma Mia” in our 2008 retrospective because we had hoped Rachel would be able to do it. Alas, with her busy schedule it hasn’t come to pass. Still, we went out to the movies for a date night, and crazy enough, I enjoyed the film more than she did. 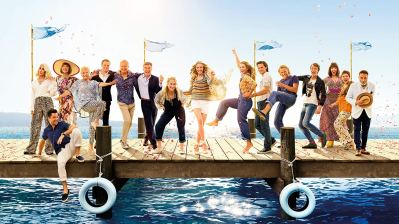 “Mamma Mia: Here We Go Again” takes “The Godfather 2” approach to the story. It is simultaneously a sequel, yet also a prequel at the same time. Sophie (Amanda Seyfried) is living in Greece at the hotel. It’s about to reopen with a new name to honor Donna (Meryl Streep). She’s living apart from her partner (Dominic Cooper) but is kept company by one of her Dads, Sam (Pierce Brosnan) and Fernando (Andy Garcia). With the opening, family friends Rosie (Julie Walters) and Tanya (Christine Baranski), are visiting. Simultaneously, we see a young Donna (Lily James) meeting the men of her future. This includes Harry (Hugh Skinner/Colin Firth), Bill (Josh Dylan/Stellan Skarsgård) and Sam (Jeremy Irvine/Brosnan). As the two stories unfold, we’re treated to non-stop ABBA throughout.

“Mamma Mia” is the definition of escapism. There are no real stakes. There’s no real drama. Instead, it’s just fun. The meaning doesn’t even need to be there. It’s just enjoyable. If you like ABBA, you’ll like this movie. If you don’t, you might not. The story flows from song to song with relative ease, creating a fun jukebox musical that pulls back some music from the first but also addresses the large ABBA catalog left untouched. One of the high points of the movie is a song and dance rendition of “Waterloo” in the middle of a restaurant.

What improved upon the original for me was the way in which certain songs were used. It feels a little more natural this time around, and the movie benefits from it. There’s also a lot more attention paid to the choreography, sound design, and small musical moments. On the flip side, you can argue it loses its camp factor. Expanding the cast also cuts down in screentime for most of the cast. For some reason, the Dads in the present are away, meaning we only get a couple of scenes with Firth and Skarsgård. One of those scenes is the two of them dancing on top of yachts to “Dancing Queen” so I’d say that’s a positive. However the past feels out of canon from the first film, and the men get very little time to shine. Each one feels disposable and is quickly moved through.

Perhaps the best moment in the film comes when Cher arrives. She not only gets one of the best numbers in the film, but she gets to go full Cher. She’s also given one of the better actors to play off with Garcia. That definitely makes her moments more enjoyable for sure. The cast also comes together in a giant musical number of “Super Trooper” at the end of the film. It’s a great bookend to a movie that has no stakes and is just fun.

Overall, “Mamma Mia: Here We Go Again” is just a fun ride. Few movies are as easy to jump into and come out without investing much. For some audience members who may have lost a parent, the events will be touching. In that regard, you can still pull some emotion from the proceedings. However, the overall feel of the film is one of celebration, not sadness. Go in to enjoy yourself, and you’ll have a good time.

What do you think of the “Mamma Mia: Here We Go Again!?” Let us know in the comments below!