There are few things that annoy me more than bad trailers. It usually means one of two things: 1) the people who are marketing the movie don’t know why the movie is good, or 2) the movie is actually bad. There are few movies that get bad trailers and recover from it until way down the road when movie fans rediscover the bomb. The new movie “Venom” may fall into that category. Yet based on everything we’ve seen so far, it looks like it really falls into column B.

The new trailer for “Venom” dropped a couple of days ago, and I had to take a minute. To be frank, I thought it was a joke. It is, but not in the way that will make the makers of this film happy. So let’s dive into this thing, because wow, this looks awful. The trailer’s listed below.

Okay first, I can’t go too long without the “turd in the wind” comment. What does that even mean? Why is Venom eating this dude? This is nonsense. I’m assuming this guy is holding up the store and that’s why the poor woman behind the counter doesn’t freak out when we see regular Venom. I just can’t. Also, if there is a giant monster who just said he’s going to eat each part of you separately, my gut response would not be “who are you?” That’s not how people talk. So out the gate, my thought is that no one in the movie talks like a human. Good start.

Second, this CGI looks awful. The worst moment is again the “turd in the wind” line, which has got to be in the running for one of the worst lines of the decade already. Why would we get the peel back to show half of Tom Hardy’s face? Again, what does this do? During the scene, Hardy’s face is so still that there’s no reason for it. It looks bad, doesn’t make sense, and there’s too much.

Perhaps the shot that they believe would help me buy-in is the fight against Riz Ahmed, who is in a completely different movie than the other actors. Well, maybe closer than Michelle Williams, who might as well not be in this movie at all. That image, shown below looks horrendous. I’m so glad we got a giant CGI budget on this thing to have two good actors be covered up and essentially act like they’re fighting giant rock ’em sock ’em robots. Tell me I’m wrong. There’s like a million things going on here and none of it is good. Look at how much Riz doesn’t want to be filming this. That bodes well. 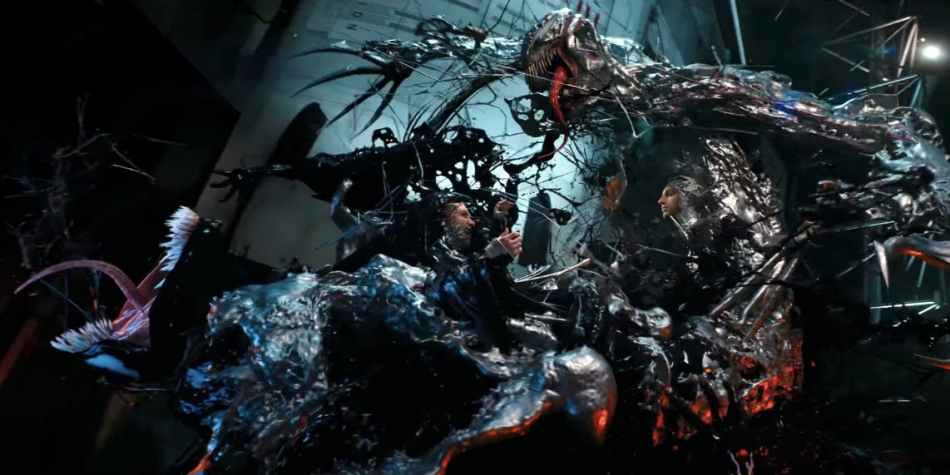 On the flip side, I’ve heard a lot of people say this is exactly how they envisioned Venom. Yeah, that’s a given. He’s a giant black spiderman monster that’s basically made of Gak and licks things with his giant ass tongue. It’s not like he has any real alternative costumes like Spider-man or Iron Man. He’s basically Black Lickitung. I’m not arguing that he doesn’t look like he’s straight out of the comics.  I’m arguing that this interpretation of the character is bad. After all, no one could argue that Dr. Manhattan in “Watchmen” didn’t look like he was out of the comics. Did that make you feel any better when you saw full frontal superhero nudity? I didn’t think so.

Basically, this whole trailer is trash. From Tom Hardy’s dumb accent, to the fact that he’s covering himself up again for 40% of the movie, to the fact that the characters don’t act human. I don’t know if Eddie Brock and his venom symbiote really work on screen. Maybe this is just a Todd McFarlane problem.  I’ve seen Spawn and that character didn’t work either. Maybe it’s the fact that I’m not 12 anymore and don’t have the angst I once did. Yet somehow, I think it’s just that this movie is a pile of garbage. Of all the ways this movie could have been made, this looks like the most boring, least creative possible version of a Venom movie. Welcome to what is likely the worst comic book movie of 2018.

0 comments on “What the Hell is Going in on the Venom Trailer?”