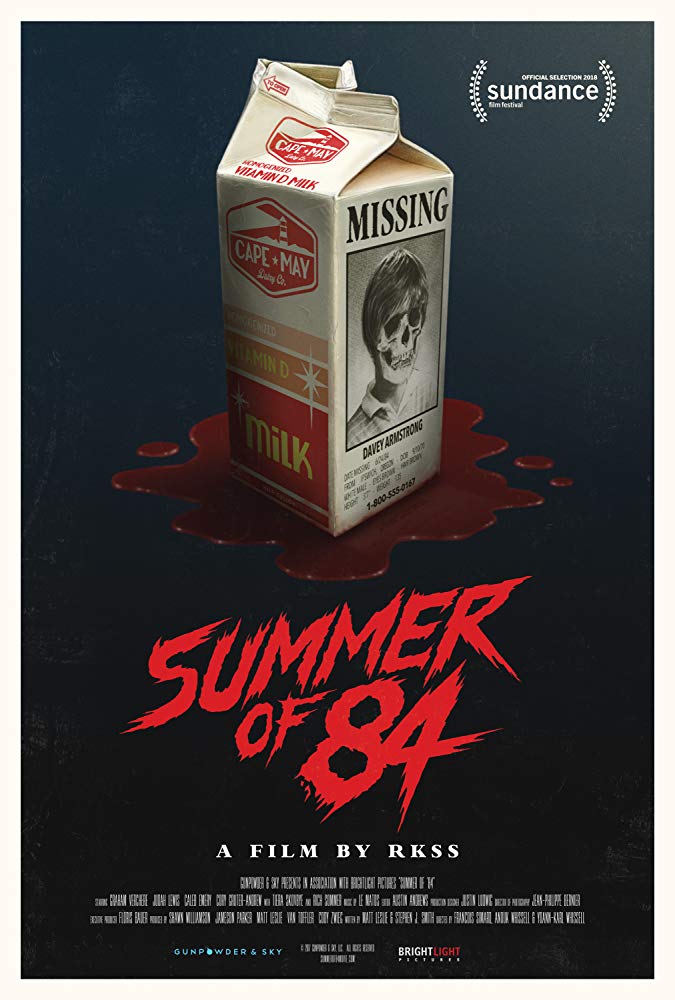 There has been a pretty strong reaction to the overuse of nostalgia in pop culture. This caused one of the backlashes against “Stranger Things,” as well as some negativity surrounding various reboots. However, diving into an era can also surprise audiences if they buy into the story. This is where Gunpowder & Sky’s “Summer of ’84” shines. Taking the pieces of previous films, and using them to take a step forward is something that many strong films have done. Through Grade-A homage and excellent storytelling, “Summer of ’84” feels destined to become a cult classic.

“Summer of ’84” follows a group of teenage boys living in Cape May, where a serial killer has brought himself into the open. The boys fit into various ’80’s stereotypes from other film franchises. We’ve got the nervous but competent hero Davey (Graham Verchere), the girl he’s crushing on Nikki (Tiera Skovbye), a loveable geek (Caleb Emery), an inappropriate, overly confident nerd Farraday (Cory Gruter-Andrew) and the bad boy Eats (Judah Lewis). Davey’s a bit of a conspiracy theorist, and when he believes his police officer neighbor Mr. Mackey (Rich Sommer) is the killer, the group rallies around Davey.

The movie plays as an excellent mashup of “Rear Window,” “Monster Squad,” and “Stand By Me.” Director trio RKSS lean into the aesthetic of the ’80’s and walk the line between homage and pastiche throughout. However,  by playing into the genre tropes, it looks to speak to the larger horror community. Many of the films that “Summer of ’84” is drawing from likely wrap up in clean bows. Yet life is not like that. There are some traumas that cut far deeper than physical pain. “Summer of ’84” forces our heroes to confront those issues.

The film features some decent performances, but there are 3 clear standouts. Sommer is very good as the everyman in suburbia, even as the film leans in to examine him. Whether or not Sommer is actually guilty becomes a recurring question, but Sommer’s performance rises to the demands of the script. It’s a complex performance, and some of the “Mad Men” alum’s best work to date.

Skovbye and Emery are also enjoyable in their roles. Skovbye does a good job as the wanted and desired girl by the group of guys but adds enough of her own flair to the role to make it more than a rehash of similar characters. Emery is loveable in his role, which will likely make you an instant fan of the actor. His performance has shades of the negativity in his life. While he remains loyal and upbeat, there are clearly issues he’s masking from his friends.

The writing is also fairly strong. The screenplay leans into the tropes of ’80’s films, which allows us to quickly link and connect the characters. This also draws clear lines to movies like “Friday the 13th” or “Goonies” in the process. This gives us a cinematic shorthand that explains the characters in a quick fashion, allowing the writers to go back later and fill in some gaps. Both Eats and Woody have very personal stories explored, which may not have been explored without the shorthand. It’s good work, and by adding emotional depth to these characters, you truly feel their struggles. This also sets up for a fantastic finale that is among the best the genre’s seen in the past couple of years. The last 20 minutes are perfection.

Unfortunately, at times the momentum of the movie peters out. About halfway through, the continued surveillance of Mr. Mackay gets a little tiresome. The first few missions to spy on him are exhilarating but after about 40 minutes, we needed some more variation. This is where the homage needed a bit of new spice to shift the movie up a gear, and unfortunately, it wasn’t there. Once you get to the 3rd act, the movie finds its way back, but it could have shaved about 10 minutes in the middle to break up the recurring plot pieces.

Overall, “Summer of ’84” is something special. This isn’t your run of the mill horror film despite hitting similar tones and drawing from recognizable characters. Instead, it takes that familiarity to craft something special and unique.  The film feels destined to be discovered over time, which makes it a perfect surprise film to show your friends.  There are few movies that will be as much fun to watch with friends and 2018, which should give it a long shelf life.

What did you think of “Summer of ’84.” Let us know in the comments below!

2 comments on “Review: ‘Summer of ’84’ Shines as a Future Cult Classic”