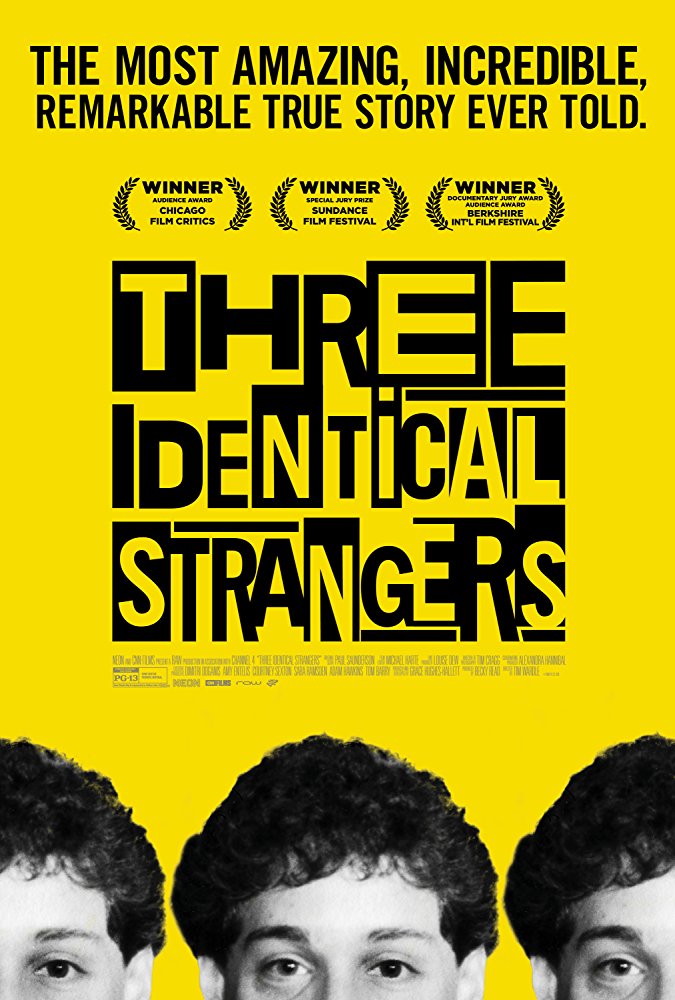 Some stories are simply too crazy to feel true. This is where “Three Identical Strangers” lives, as something that paints itself as a feel-good story, only to become a nightmare as it unfolds. It’s often strange to see documentarians turn their attention to a story that has been in the popular imagination for years. In the case of the triplets of “Three Identical Strangers,” their stories made headlines in 1980 and made them famous around New York. Yet with director Tim Wardle‘s examination of their lives, we get a far more complex story beyond your craziest imagination.

“Three Identical Strangers” begins as David Kellman, Bobby Shafran, and Eddy Galland meet each other through a series of happenstance moments. Bobby and Eddy ended up attending the same college. When their story ends up on the cover of National newspapers, David realizes he’s the 3rd sibling. The three become close, partying throughout New York and eventually open a fairly successful restaurant. Yet when they begin to dig into how they were separated and why the story begins to take on far more insidious tones.

As the brothers begin to find out about their birth mother and the mental illness that runs between them, their parents confront the adoption agency. While the initial meeting is apologetic, when one of the parents leaves an umbrella in the room, he accidentally walks into a celebration. With more digging, it becomes apparent the agency did not simply split the children to make it easier for them to get adopted. Instead, they split the three boys as part of a larger experiment to understand nature versus nurture through children in the 1960s. Before ethics boards and IRB, here is a story of an unethical psychological study of the highest kind. The results could settle millennia of questions regarding nature vs. nurture. But at what cost?

This is why “Three Identical Strangers” is one of the best documentaries of the year. The initial story is feelgood and will make you happy for the brothers. It’s comedic and charming. The brothers are an undeniably fascinating group together, and you become invested in their emotional wellbeing. Wardle brings their story to life wonderfully and lays important groundwork for the story to come. He uses some footage expertly, only to recontextualize the footage in darker scenes later in the film. His direction is key to the success of the film, slowly bringing in narration, interviews, and footage that continually ups the stakes. Despite the fact that this story is decades old, Wardle makes it fresh and new. It is one of scientific mispractice so egregious, you’ll question everything about the world. Frankly, it is one of the scariest films of the year.

Overall, “Three Identical Strangers” is a tight and gripping documentary that everyone should see. How you could leave this documentary and not be shaken to your core is beyond me. It is harrowing and emotional. It will make you question things about yourself, and about the power of institutions. While the story ends hopefully, it also breaks you down with each reveal. This is one of my favorite films of the year, and it will be remembered as one of the best documentaries of the decade.

What did you think of “Three Identical Strangers?” Let us know your thoughts in the comments below.

2 comments on “Review: ‘Three Identical Strangers’ is Riveting and the Year’s Best Documentary”