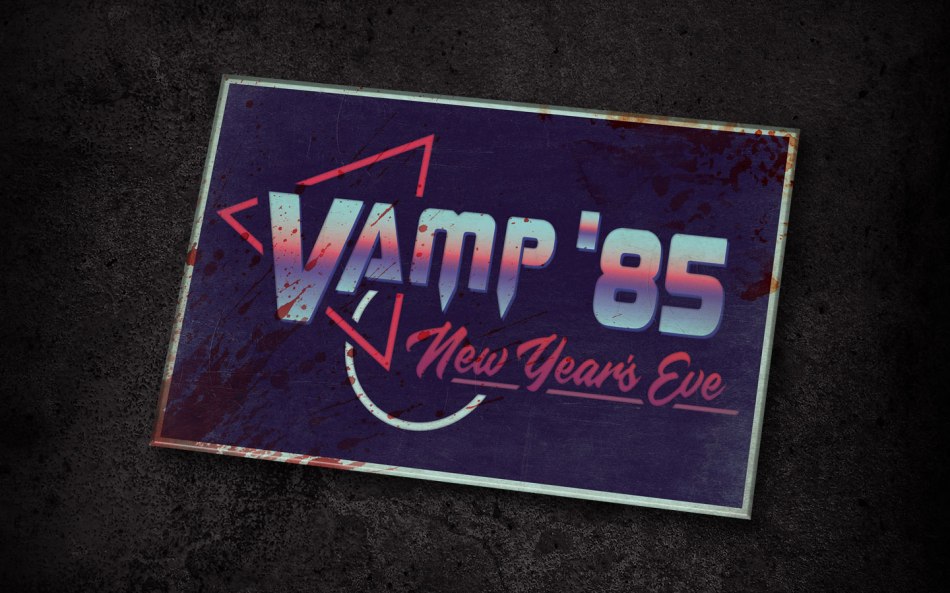 One of the great things about Scarezones at Halloween Horror Nights are the zones heavily inspired by films of the past. Over the past few years, there have been zones designed around specific IPs, such as Chucky’s Revenge and Killer Klowns from Outer Space this year. However, some of the most interesting zones in recent years have just drawn from a genre, without committing to a single IP. Look at Dead Man’s Wharf from HHN 26 or Invasion from HHN 27.

This year, we get an awesome combo of homage and HHN sequels in our largest scarezone. VAMP ’85 is sure to be one of the most exciting zones of the year, for a litany of reasons. When Vamp ’55 took over Hollywood at HHN 26, many considered it the best zone of the year. With an ’80s vibe infused into a rock and roll party, with New Year’s Eve as the theme, we can have something very special on our hands. With that in mind, let’s look at what we can expect from the zone.

1. New Year’s Eve Ball – The ball drop has already been confirmed. We’re getting a giant ball drop every 20-30 minutes according to Aiello and the live stream, so that should be a lot of fun. The visual will definitely be interesting to watch at least once, and how the vamps interact with it should be interesting. Get ready for this one to be one of the most memorable set pieces of the year.

2. Dance Party – I expect there to be plenty of zombies in the streets. We got some dancing and enjoying the festivities at Vamp ’55 but with the New Year’s celebration expect even more. Now to be clear, I’m not talking Disney style dance parties with a DJ. I’m talking scareactors walking around and potentially having a breakdown a few times a night. Seems like it would be a missed opportunity otherwise. Given that it’s the ’80s we could also see some of these parties occurring on scaffolding here and there. Considering half the music from the age specifically mentions dancing, it’d be weird if we don’t get some dancing.

3. New Year’s Eve Show – This is an interesting topic. It would be really awesome to see a Dick Clark New Year’s Eve show. Even better, it would be amazing to see the ruins of one of these shows with Vamps running wild through the set. Imagine the deaths. Imagine the kills. It could be glorious.

4. Crazy Cars and Vintage Vehicles – The ’80s had some very cool vehicles that make no sense in retrospect. Perhaps no vehicle is more closely associated with the era than the Delorian. We know a Delorian is on site, but it’s doubtful they’ll use it for HHN outright. Then again, I’m just hoping here, and how cool would it be to see vamps hanging out the open door?

Even if we don’t get those cars, look no further than Miami Vice. There are plenty of great cars to choose from. It would be amazing to see a Testarossa drive down the street, but let’s be real, that’s not happening. However, a ridiculous sports car could absolutely be put out on the street. Fingers crossed we get a very cool car riding down the road.

CHARACTERS/EFFECTS WE HOPE TO SEE

1.. Miami Vice – How would it be possible to do this area without some crazy flamboyant clothes choices. The blues, the pinks, and white suits are musts. T-shirts inside of jackets. Rolled up sleeves and sunglasses at night. These remain some of the most iconic images of 1980’s style. Look no further than Grand Theft Auto: Vice City. The game is iconic, and the style also showed up in Archer: Vice and others parodies of the era. Yet that’s what makes the parody so strong, that it works as homage and love.

2. The Brat Pack – One of the iconic groups of the 1980s was the Brat Pack, a clever turn on the Rat Pack of the 1950s. The world of the Brat Pack was just around the corner, and the style they brought was already there. It began in earnest

While the Brat Pack was not in the pop culture until 1985, their impact was huge. They were already getting recognition for some of their work, including Sixteen Candles from 1984. I’d expect some of their styles to show up in some form. Check below for some of the definitive looks. 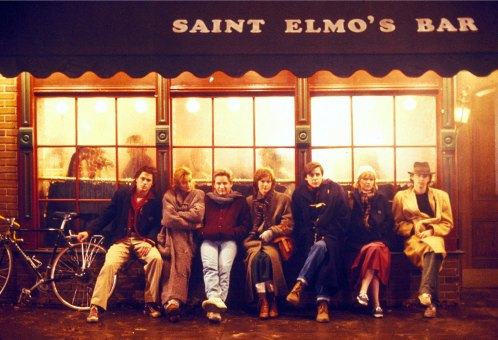 3. Mullet Wearing Vampires – The mullet is one of the iconic looks of the era. It was punk rock, but also not at all. It meant you were down to party and remains an iconic hairstyle of the time. Expect a few vamps to rock a sweet mullet here and there.

4. Dancers – Dancing in movies was the rage in the 1980s. Even more importantly, the clothes dancers wore became iconic in their own right. Flashdance came out in 1983 and was followed by Footloose in 1984. Dressing in tight clothes, leotards, or super baggy clothes (sometimes all at once) remain great looks for the time. With the theme in place, I’d be surprised if we don’t see a few overly large sweaters or leotard wearing women.

5. A Motorcycle/Street Gang – Perhaps the most inspired by the legendary Lost Boys or Near Dark. These dudes could be dark and mysterious. It also creates a more hardened edge to the greasers of ’55. That said, those Vamps would still be the same age and could have the same look. Maybe they just added a bit more leather and some sunglasses. 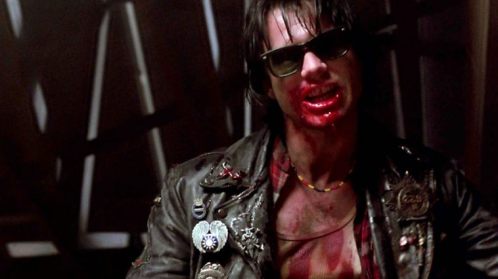 Here’s hoping we see the return of my favorite vampire from the ’55 scarezone. Fingers crossed.

The Lost Boys (1987) – This film not only features great style for the 1980’s but some classic vampires. It is one of the generational films that everyone needs to watch at least once. As a result, The Lost Boys is an obvious choice to get the vibe of the zone. Not only that, but we’ve had it confirmed from several of the creative forces behind the scarezones, including Bill Blaswell that this specific movie provided influence on the zone. Considering that he’s in charge of the Scarezones, I’d say that’s a pretty good source.

Fright Night (1985) – A film just ahead of our theme, Fright Night remains an iconic feature of 1980’s horror. It is both comical and legitimately frightening at times. Chris Sarandon absolutely kills it in the film, and the creature design is amazing. It is a shame that we’re not getting this film as a house this year, especially given some of the design it could bring out. It would be amazing if we can glimpse some transforming or even dying vampires in the zone. We’re looking at you Evil, who has one of the most gruesome death scenes of the era. 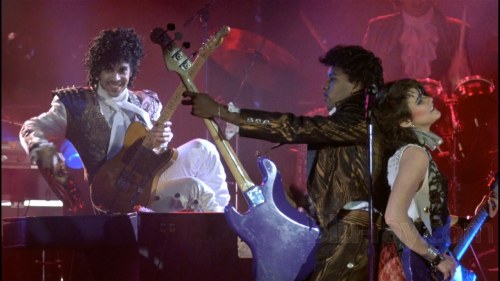 Purple Rain (1984) – One of the iconic films of the 1980’s came out in 1984. There’s no denying that we’re likely to hear some Prince in the scarezone, especially considering that “When Doves Cry” was the Billboard number one single in 1984. Prince was at an all-time peak, and his style perfectly melds with the theme of the zone. “Let’s Go Crazy,” and “I Would Die 4 U” are perfect tracks for both the Vampire theme and the New Year’s theme. Again, we’ve already been told by Blake Blaswell that the playlist draws heavily from 1984, and many of these songs define the year. Purple Rain would go on to win Oscars and remains one of the great musicals of the era. 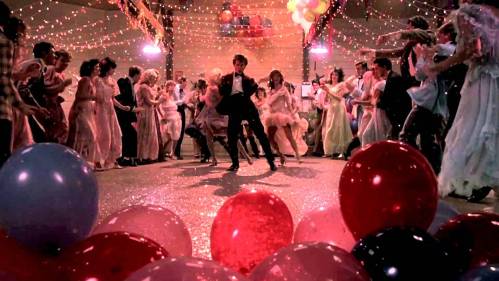 Footloose (1984) – Another film that will have its fingerprints all over the zone has got to be Footloose. The film featured many of its own original music from Kenny Loggins and Deniece Williams cracking the top of the charts. “Footloose” and “Let’s Hear for the Boy” were enormous hits. Each song was in the top 15 at the end of the year, and in a theme defined by parties and dancing, expect at least one to make an appearance. Also, there will be dancing. Lots of dancing.

Ghostbusters (1984) – We’ve included Ghostbusters before, but the film needs a 2nd go around. After all, it features another one of the iconic songs of the year. The “Ghostbusters” song by Ray Parker Jr. remains a cultural phenomenon today. Again, it was a mega-hit at the time, coming in at number 10 on the charts. Considering the gang has been in the park before, and music from Ghostbusters II already features in the park, it would be a surprise if we didn’t get a taste.

BONUS: MUSIC TO CHECK OUT!

Hey, we know it’s going to be a 1984 heavy playlist, so let’s check out some of the songs that should make an appearance. Here’s a 25 song playlist!

Where does VAMP ’85 fit in your anticipated scare zone list? Let us know in the comments below!

1 comment on “Halloween Horror Nights Scarezone Preview: Vamp ’85 Could Be Best of the Year”