There are few films that have me more excited in 2018 than Damien Chazelle’s First Man. The film follows America as it goes to the moon, with none other than Ryan Gosling playing Niel Armstrong. However, if you’re expecting Apollo 13, you might need to slightly adjust your expectations. On the heels of a very successful debut at the Venice Film Festival earlier today, Universal has released a 2nd trailer for the film.

There are two things that stand out in this trailer, and it seems to be the same things many have mentioned about the film at Venice. First, this is visually going to take us into space in a way we’ve never been before. The speed of a spaceship feels unreal, as do the physical bursts we see. It is a grueling toll to just watch in a trailer, let alone experience in a seat. Who knew Chazelle had the ability to turn on a Nolan style of realism, and still make it look so good. These visuals look astonishing and promise a new feeling in a movie theater. Who knew going to space could feel so different?

The second thing that stands out is Claire Foy. Foy should already be a household name, yet for whatever reason, people don’t like The Crown in some of my circles. That’s too bad, because this is clearly something very special. She’s on fire in these scenes, bringing an intensity and heartbreaking realism to her character. If you were told your significant other would be the first man to go to Mars, but you’d never seen a spaceship that didn’t blow up, how would you feel? Her feelings and intensity is genuine and shows a drastic departure from her work as the Queen of England. This could very easily be the performance to beat in this category this year. 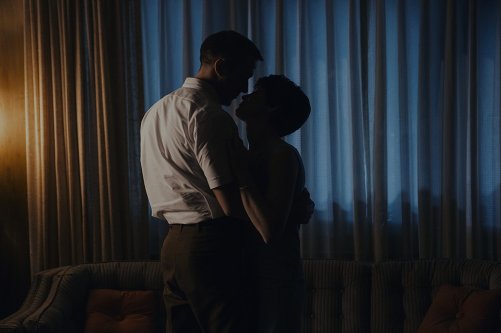 Between the visuals, Foy, and a solid Gosling as the dramatic straight man, we have a lot to be hopeful for with First Man. What is very nice is that we’ll all be able to check this film out in October, not December or January like we have with other films in recent years. This looks a bit better than The Right Stuff, a great film about the space race, and should come close to Apollo 13 territory. Fingers crossed it surprises and is somehow better.

What do you think of the trailer for First Man? Let us know your thoughts in the comments below!

0 comments on “Trailer Talk: ‘First Man’ To Take Us to the Moon and Back”