If you were born in the 1980s and 1990s, you grew up knowing the joys of the romantic comedy. It didn’t really matter if you liked them or not. They were suffocating. Every direction you turned, you’d find another solid RomCom. Many of the best were placed within the confines of a high school, including Mean Girls, Sixteen Candles, and Clueless. However, in the 2010s, the genre was mostly passed by. As many officially declared the genre was dead, 2018 has featured several great ones already. Among those is the surprisingly strong To All the Boys I’ve Loved Before.

The plot of To All the Boys I’ve Loved Before follows Lara Jean (Lana Condor), a high school junior who fell in love with best friend and sister’s beau, Josh (Israel Broussard). However, rather than tell Josh her true feelings, she writes him a letter. This is Lara Jean’s tradition that she’s done to all the other boys she could never tell her true feelings. Since her time at camp, she’s loved 5 boys but remains wistfully alone.  However, when her sister Margo goes to college in Scotland, someone sends out Lara Jean’s letters. Now Josh, and her former best friend’s ex, Peter (Noah Centineo), know her feelings. To avoid Josh, Lara Jean makes a deal with Peter to pretend they’re dating. 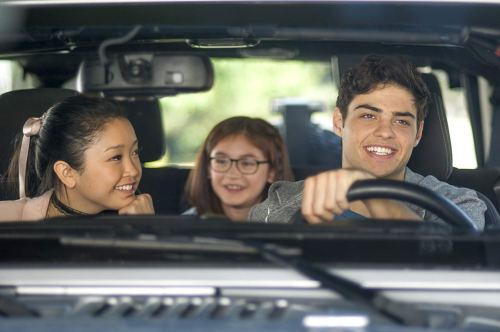 The set up to the film is fun and enjoyable, giving you time with each character to really set them up. Some of the actors and actresses pop off the screen and none more than Centineo. He is a star from the word go, taking over the film and making sure you’re paying attention to him throughout.  His charisma is undeniable, and with some strong comedic timing and facial expressions, he can clearly owns the screen. He’s charming and helps lift Condor’s performance.

Condor is also very good, and the two know how to lead a picture. It’s rare you find actors this young to weave in subtext or sell jokes that are out of their age group. Realistically, Lara is a little too heavy on John Hughes references for your modern high school junior. However, Condor makes Lara Jean very likable, which makes you care about the events of the film.

The rest of the cast is serviceable if not a little above average. Trezzo Mahoro stands out as someone who draws the short stick. He should probably get at least one more scene if not two or three. It is good to applaud the film and not just turn Mahoro’s character Lucas into a GBF. However, he’s too talented to only get a few scenes, and he feels underused as a result. John Corbett from My Big Fat Greek Wedding play’s Dr. Covey, Lara’s father. He’s very fun and “dads” his way through the film. They’re best from the rest of the cast, which doesn’t mean much sadly. You want a little more out of the other characters, but really the Lara Jean and Peter show owns the film.

There are some slight issues with the rest of the film that could pull some viewers out. The film does not have that movie shine that others often have. It’s randomly dark in some scenes, and needed a bit more polish, especially early. It’s almost as if they were given a better camera for later scenes in the film, as the movie gets better as it progresses. Sadly, the cinematography s one of the weird low points of the film. The pacing was rather good. We get into the main story pretty early, and it’s a fun sham. Points for the editor, writers, and director to not get too bogged down. The pace is brisk, and we need that in a romcom. While the story doesn’t break any new ground, it’s very good at each RomCom cliché to create an above average script.

Overall, To All the Boys I’ve Loved Before is something special. It was so good, it feels like it has taken the conversation from many of the films of the past few weeks. While we should all be focused on Crazy Rich Asians and The Meg, we’re instead talking about a Netflix film. It’s a great place to be for the streaming service, and this film should remain one to revisit over and over.

What did you think of To All the Boys I’ve Loved Before? Let us hear in the comments below!

1 comment on “Summer Catch Up: ‘To All the Boys I’ve Loved Before’ is Great Teen Comedy Fun”