Set in Medieval England, Quest for Camelot is an animated telling of what happened following the classic tale of King Arthur and his knights of the round table. As a Warner Bros animated feature, it had the similar styling, visually and musically of many Disney features, though the animation is much less clean. That said, character design and environment rendering do not suffer for it.

Additionally, the film is bolstered by some very strong (and recognizable) voice talent, including Gary Oldman, Eric Idle, Don Rickles, Pierce Brosnan, and Cary Elwes. The film focuses on the young daughter of a knight of the round table who is killed in the film’s opening segment. Longing to follow in her father’s footsteps, Kayley (Jessalyn Gilsig) sets out to recover the mythical sword Excaliber in order to save the kingdom from the villainous former knight Ruber (a fantastically sinister Oldman). Along the way, she encounters a dashing but blind hermit (Elwes), a two-headed dragon (Idle, Rickles, brilliant), and a chicken with an ax-for-a-beak. Did I mention that it is a musical? On paper, that’s a lot to get excited about. However, the film arrived to meek attendance and a low box office.

When I Fell in Love with “Quest for Camelot”

From the opening musical number, I was enthralled with Quest for Camelot. As the score by Patrick Doyle begins with its steady drums and Celtic lilt, I was hooked. It was the music that hooked me and the characters that kept my interest. The original songs are all catchy and the characters are distinct and fun. My favorite? The useless ax-beaked chicken. Why? I was a child and he was weird looking and funny. 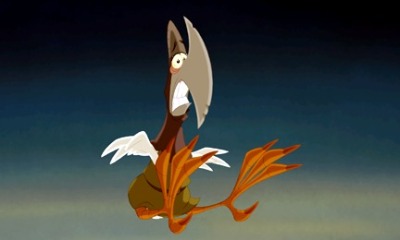 To this day, the scene that sticks out most to me is the musical number of the two-headed dragon, Cornwall and Devon. This film’s Timon and Pumba, Devon and Cornwall are brothers. Due to years stuck with which other, they are bitter and frustrated. The song, which comes midway through the movie, is about what they would do if they didn’t have one another. It’s the first time the movie takes a step out of its time period to make jarring pop culture references. What’s fantastic about this is that Idle, as a member of the infamous Monty Python, skews the genre in this film that same way his troupe did in its most popular work, Monty Python and the Holy Grail. That in itself is a fun meta-reference. Beyond that, it’s a fun, catchy song that ends with an Elvis impersonation.

The best scene in the movie is another musical number, this time sung by Garrett (voiced by Elwes, sung by Bryan Adams). Shortly after meeting Kayley in the Enchanted Forest, Garrett expresses his isolation through an empowering power ballad (“I Stand Alone”) that could have been a contender for a Best Original Song Oscar had the, even more, moving “The Prayer” not snagged the nomination. What elevated this song above any other in the film, and, indeed, above any other in children’s movies of the time, was that it was a song sung by a character with a disability about how he rises above his disability.

The content of the song aside, the animation transitions at this point. Until this point, the Enchanted Forest was nothing more than a bleak obstacle in the hero’s journey. Ostensibly, we were seeing it through her perspective, clouded by fear and anger. Under Garrett’s unique “vision,” the Forest reveals its mystic beauty, with twisting vines, fantastic creatures, and vibrant colors. This is how Garrett sees his environment and it shows that the beauty in the world is more than appearances. To host not just one but two strong messages within a single sequence without overreaching is something that has yet to be matched in animated cinema.

Quest for Camelot is a timeless tale that, visually, is a product of the nineties. Its animation doesn’t hold up quite the way that most Disney movies do. However, in terms of content, it doesn’t pull any punches when it comes to characters with disabilities, legacy, death, and evil. The songs do stand the test of time and are still as catchy and moving as they were upon the film’s original release. Though it was the first animated feature of the year, it was overshadowed by higher-profile films such as Mulan, A Bug’s Life (which I’ve previously written about), The Prince of Egypt, and The Rugrats Movie. Despite all that, the film has heart and ambition and deserves another watch.

What do you think of Quest for Camelot? What do you remember about the film? Let us know in the comments below!

0 comments on “1998 in Review: ‘Quest for Camelot’ Features the Middle Ages in Non-Disney Animated Film”