Choosing to film a movie in black and white is the surest way to make your film feel timeless. The features that shoot using the effect have grand ambitions to tell a story that transcends the moment. In a sense, that is what Alfonso Cuarón attempted with “Roma,” which just released worldwide on Netflix. However, what separates “Roma” from other recent journies into black and white is the small and focused story it tells. Yet the story of a young maid living in Mexico City might be his most universal story the director has ever crafted. Even for someone as accomplished as Cuarón, “Roma” stands out as one of more remarkable pieces of filmmaking in recent memory.

“Roma” follows the story of a young maid named Cleo (Yalitza Aparicio) living in 1970 Mexico City. Cleo serves as one of the live-in maids for a middle class family in Mexico City. The children of the family play with Cleo, and she takes care of the dogs and house while they are at school. The parents (Marina de Tavira & Fernando Grediaga) begin a to seperate, with the father saying he will be on the road for travel. Meanwhile, Cleo has her own relationship issues, especially after she discovers her pregnancy. She must face the challenge and handle the pressure, while still balancing her life with the family.

When you watch “Roma” the two actresses at Roma’s core stand out. Aparicio delivers one of the best performances ever by a non-actress. Her subtlety is impressive, and you feel empathy for her every moment on screen. She is sincere and naive about the world, and that belief puts her on the path to real pain. Aparicio pulls out pathos in each scene, even as she attempts to fade into the background. Yet Cuarón’s direction begs you to watch her in each scene, even as she falls to periphery of the shots. He is a director that is transfixed by her ability, and wants to showcase her in each moment. 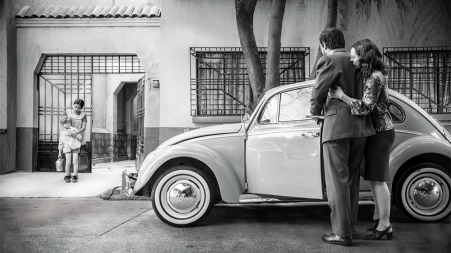 Tavira is also brilliant in many of her scenes. Her struggle and pain are palpable, and help her become an important foil to Cleo. The two have amazing chemistry, and their love feels genuine. Tavira gets spotlight moments, but also has the ability to bring the tears from the audience. Her story would be the primary narrative in most movies of this kind, but Cuarón’s choice to put her in the background gives her show stopping moments. Reframing the grieving mother as a source of strength to those around her makes her just as essential to the story of Roma. 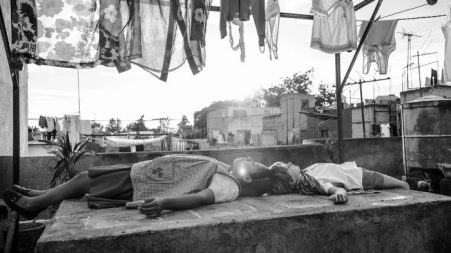 Cuarón proves this will be his iconic work through his work as both the editor and the cinematographer. The images that Cuarón captures are so fantastic, they are simply a masterclass in choreography. As children run down the street, cars zoom by or have to slam on the brakes to avoid hitting our characters. The oners that Cuarón uses to open the film are simple, yet impressive displays of place. The geography of the house is fully realized, and Mexico City feels tangible. Even as Cleo travels to various parts of the city and the world, a sense of place never leaves the shots. Cuarón pieces these shots together to give each piece of the world it’s own unique feel.

Perhaps most important in the cinematography is the sympathy with which he shoots our characters. There is a softness to the frames, and Cuarón makes every moment of his character’s lives feel important. We follow Cleo as she goes to the movies with friends, and her in the moments after she’s abandoned in that theater. Cleo and Adela (Nancy García García) do their exercises, dogs and birds hang out in the courtyard, and children love to play at the beach. Even small moments are worthy of the big screen, and that gives the film power. It makes everyday life cinematic, and the love letter to his own housekeeper makes Cuarón’s narrative even more resonate.

This doesn’t even begin to discuss the black and white memory of the cinematography. By shooting in this style, it gives every moment of Roma a hazy feel, despite the crisp imagery on screen. Cuarón evokes a timelessness we rarely see with this kind of narrative, drawing lines to Italian Neo-Realism features like The Bike Thief. Yet the presence of the children and the ways that Cuarón shoots their interactions with Cleo makes for heart-wrenching moments. The director brings out a beautiful relationship through pure visual storytelling, and it clear that Cleo is far more than just the housekeeper. She is not just a member of this family, but one of the most integral pieces in their lives. The beauty that he catches on film will make your heart melt.

A lot has been written about the sound, and it is quite incredible mixing. The placement of sound is very deliberate, and even on Netflix, you still get a good feel for how intricate the team designed the audio. While surround sound gives you the best option to listen to the world (it felt like there were people behind me in the theater talking), you can still appreciate the art. It is quite the accomplishment, especially in sequences where dozens of characters are moving in and out of the frame, but their soundscape is still very much within earshot. More than most film in recent years, the characters experience life, even when they leave the view of the camera.

However, there is one hang-up that will distract some audiences. Frankly, the movie takes time to develop. Some impatient viewers may not be willing to give the movie that opportunity. However, there are few movies more rewarding this year. Do not give up on the film because of its pace. Appreciate the moments that that time builds towards. Each moment matters as it builds toward the conclusion, so please stick with it.

Roma is a beautiful and masterful experience, one that should be experienced by people worldwide. It is undeniably one of the best features of the year, and one of the best of the past fifteen years as well. There’s something really special by Cuarón’s latest, and it goes beyond the simple craftwork. Instead, the director captured his most emotional, beautiful, and heartfelt vision. It is the director’s greatest film to date, and it brought to life wonderfully by two amazing performances.

What do you think of Roma? Let us know your opinion in the comments below!

0 comments on “Review: ‘Roma’ Affirms Alfonso Cuarón Is a Master”