The history of movie stars in Hollywood seems to be in jeopardy. Outside of Tom Cruise or Denzel Washington, there are few actors or actresses who bring audiences to the theater. The role of a movie star was to sell a movie through charm, charisma, and a wink to the audience. In most cases, these actors would star in softer romantic comedies, saccharine inspirational stories, or big budget action films. However, the last decade has seen somewhat of a return to the studio system with the success of Marvel and Disney. Yet directors, such as Guillermo Del Toro or Barry Jenkins make themselves accessible to audiences, and gain clout. The combination of the studios and directors becoming bigger stars has left the actual movie stars out in the cold. However, this is not the case for On the Basis of Sex or stars Felicity Jones and Armie Hammer.

What makes On the Basis of Sex an interesting counter program to the tentpole films dominating the box office last weekend is this return to movie star movie making. With strong direction from Mimi Leder, the snapshot of the life of Ruth Bader Ginsberg lets its stars show off their charisma. Both Jones and Hammer have a mixed record in Hollywood, but each has been earmarked as bankable stars. Jones led Rogue One: A Star Wars Story and earned her first Oscar nomination for The Theory of Everything. Hammer’s looks have made him a Hollywood staple, but his performances in Call Me By Your Name, The Social Network, and The Birth of a Nation were all nomination worthy performances. Yet before On the Basis of Sex, it seemed neither of the performers had been able to perform to their strengths, and Leder seems to have unlocked them in a big way.

On the Basis of Sex follows Ruth Bader Ginsberg (Jones) from her first days at Harvard Law School. She faces discrimination from her teachers (Sam Waterston & Stephen Root) and fellow classmates. Her husband Marty (Hammer) is also a student but after his cancer diagnosis, she must get both of them through law school. After graduating, Ginsberg finds her way onto a case that can help women push for equal rights. With the backing of the ACLU (Justin Theroux), Ruth and Marty embark on court case that could help women’s equality, or set back the movement decades. 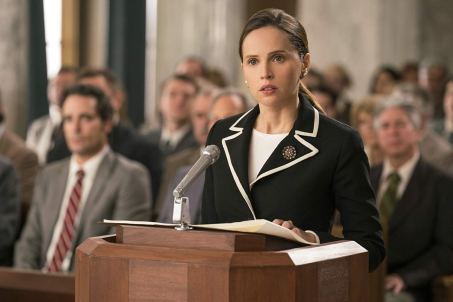 Jones has not really impressed me in her roles to this point, often frustrating me with her overall demeanor. Yet her time as Ginsberg really swayed me on the actress. While the British actress struggles with the accent at times, her earnest approach to each action helps her feel fresh in the role. She handles moments of adversity with poise, but the frustration can still be felt through queues in her body language. It was impressive to see her dominate the screen in this film, and while the screenplay puts her in cringy spots, she excels.

Meanwhile, Hammer shines as a scene stealer and supporting character. He does his best to help Ruth through the trials she faces in and out of court, but his cancer diagnosis sidelines him. However, when Hammer’s Marty is healthy, he absolutely shines. His charisma is out of control, and your eyes are consistently drawn to him. He is so charismatic, the other characters in the film often defer to him, or ask him to take on a bigger role in the narrative. Yet what makes him so loveable as a character and an actor is his chemistry with Jones. They do get the most out of each other, and his ability to turn it down to give her the moments to shine works both narratively, and within the context of the film.

Leder directs what should be a fairly by the book script to become something more. While the overall movie feels like a throwback to the biopics of the 1990s, it has a surprising amount of technical prowess. The camerawork from DP Michael Grandy is efficient and works within the context of the story. The characters look great in their multi-colored costumes, and Isis Mussenden knocks it out of the park here. Leder’s overall efficiency brings an energy to the film, and the story does not have any fat to cut. Instead, everything builds, and the movie benefits from the slick editing from Michelle Tesoro. Ultimately, it’s Leder’s trust in Jones and Hammer that carries the film furthest.

Overall, On the Basis of Sex is not a perfect film, mostly hampered by a rote script. However, it is the right kind of throwback film for the holidays. Considering the role that Ruth Bader Ginsberg plays in American culture today, the movie brings an energy to her story. With Leder’s direction and the combination of Jones & Hammer, this is one of the better offerings in theaters this holiday season.

What do you think of On the Basis of Sex? Let us know your opinion in the comments below!

0 comments on “Review: ‘On the Basis of Sex’ Lets Jones and Hammer Embrace Their Movie Star Personas”