Sigh. Here we go again. Last year, I had to convince you dear and loyal readers as to why my pulp-filled top 10 was worth reading. This year is an even harder sell because, save for perhaps a solid three true favorites, this year was simply okay. And I’ll tell you why that is. A-List, MoviePass, and stupid people have ruined the movie-going experience for me. Plant yourself in the tourist Mecca of irresponsible and truly deplorable etiquette and you might find going to the theater to be more of a chore than a chance to escape into the imagination of the filmmakers.

As such, my enjoyment of this year’s cinema is heavily skewed. I didn’t see many of the films I wanted to because I chose not to subject myself to utter rudeness and a blatant disregard for the respect of your fellow audience member. The films I did see, I admit to being distracted by the aforementioned tomfoolery, thus hampering my overall enjoyment of the features. Or, perhaps even more infuriatingly, they simply didn’t live up to my expectations. The rest were just plain awful. Hurricane Heist, I’m talking to you.

So what we are left with is a toss-up of basically nobody’s favorites, presented to you in list form of least sucky. I present to you, patient and understanding readers:

10) Once Upon a Deadpool 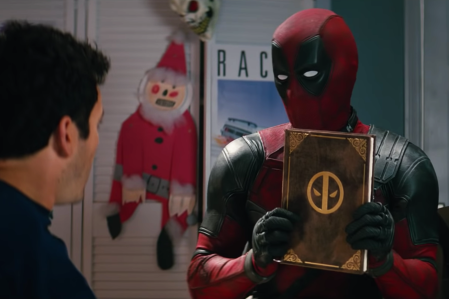 Deadpool purists lament the Merc with a Mouth being regulated down to a PG-13 rating. It’s the cursing and blood and guts that make him so entertaining, right? This experiment for charity answers that question. I was no less entertained by this watered down version of Deadpool 2 than when I saw the original. In fact, I actually enjoyed the narrative framing of Once Upon a Deadpool. Having Fred Savage unwillingly reenact his childhood role from The Princess Bride is so perfectly Deadpool. Watching this is like having a visual to go along with the audio commentary on a Blu-Ray extra, which, in itself, is often entertaining enough. Having Savage point out the shortcomings of the original film allow those errors to now have a purpose, raising the overall quality of the entire product.  Deadpool can work as a PG-13 or R without losing its entertainment value.

Christopher Robin is noteworthy for two reasons. First, voice acting. Jim Cummings absolutely brought such a fantastic gravitas and innocence to Winnie the Pooh and Tigger too. While seeing these traditionally animated and beloved characters brought into the real world could have been a bit of a culture-shock and weird juxtaposition, Cummings’ voice bridges that gap. It is a whole new Pooh but it is still familiar and relatable to those who have grown up with the silly old bear. Second, it is simply a heartwarming and genuinely good story. There is conflict but nothing malicious. Emotional but not heartbreaking. It strikes a very positive tone and sometimes that is the most important thing.

I am not a horror aficionado. In fact, I’m not a fan of being scared at all. However, something was different in A Quiet Place that made it seem different. Perhaps it was the beautiful silence that permeated the film. What the filmmakers do with the absence of sound is more effectively unsettling than showing monsters. The acting is top-notch and the relatively concise script doesn’t ever feel bogged down in exposition or time-filling subplots.

Here’s where you are surely saying “Pump the breaks. This future-anthology-ending, behind-the-scenes mess of flick made your top ten? Have you got Hyperspace Sickness or what?” Again, I refer you to my defense of all things Star Wars when I put The Last Jedi at #2 last year. It makes the list simply because it is Star Wars. And I’ll tell you what. Solo is better than The Last Jedi. Solo captures the fun, excitement, and adventure that is Star Wars. Solo fleshes out the universe the George Lucas created. Solo is not perfect but it doesn’t suffer from the inconsistencies that should be evident from such a late-in-the-game director or should it be heralded as a failure due to mishandled marketing leading up to its release. It stands on its own and is the first of the Disney-produced Star Wars movies to capture the fun of any of the originals. That said, the meaning behind Han’s famous last name? C’mon, you can do better than that!

Fight me. I loved Fallen Kingdom. I was on the edge of my seat from the word go. The privatization of dinosaurs is the next natural step in the franchise and the questionable decisions by the characters deviate so minutely from decisions made in the other films (taking raptor eggs, kidnapping a baby T-rex, running in heels, using amberized DNA to create dinosaurs and make a theme park out of them, etc) that that cannot be seen as a fault of the film. I’ve never been made to feel for the dinosaurs until this one. They weren’t really given personalities before, regulated to beastly antagonists. I appreciated that the argument for their rights was finally addressed, allowing the franchise to explore even more of the moral dilemma inherent in humans playing God. Also, unlike Indominus Rex, the Indoraptor is downright terrifying.

Game Night stands out to me as the only great comedy of 2018. The premise was original and fresh and the performances were top-notch. As an avid game night participant, this movie perfectly summed up the dynamics of a group of adult friends who use the playing of board games to connect and share their lives and air their problems in a healthy way. The film was made to be even more engaging by allowing the audience to play along, inviting them to follow the clues to determine the course of the “murder” mystery, with plenty of twists to keep them guessing. The laughs come hard and often and the opening and closing credits are possibly some of the coolest this year.

How is it that 6 movies in, Mission: Impossible does what other franchises cannot? Each outing ups the ante on stunts and is arguably better plotted, acted, and executed than the entry before. There will surely be a point where Tom Cruise hits a plateau as Ethan Hunt but this is surely not it. It helps that Christopher McQuarrie is the first director to helm two consecutive sequels, allowing the chance for this movie to seamlessly build off its predecessor. The action is breathtaking and unrelenting, giving the audience a sort of visceral experience of being in the trenches with the IMF. At the end of it all, you sit in the theater trying to catch your breath, not realizing that you had been holding it for the past two hours. Solidly the best action movie of the year. Sad that Jeremy Renner was too busy nursing his broken arm back to health to participate in this mission. What’s that, you ask if he broke it filming Avengers? Nope. He broke it filming Tag.

While not quite practically perfect in every way, Mary Poppins Returns did delight from start to finish. The music of Marc Shaiman did miss a bit of the whimsicality of the original Sherman brothers songs and score but was fun and fresh in its own way. Emily Blunt did a respectable job of making Poppins her own without the need of being a Julie Andrews impersonator. However, the real standout here was Ben Whishaw who brought such a heartbreaking weight to the character of Michael Banks that the need to save the Banks children was clear. Personally, Disney’s use of traditional animation for the first time since 2011’s Winnie the Pooh was another highlight. Eventually, Disney will toss aside Meryl Streep like they did Johnny Depp and their movies will be better for it, for her segment was the point when the film slowed to near a halt before zipping right back up again.

It truly was a banner year for Marvel. It is easy to think about how big a film Infinity War is and make a snap decision that it was the best of the year. In terms of the box office, it certainly left all the others in the dust. Compared to the other many comic book movies released this year it stands out in stark contrast as the one that raised the stakes. Heroes aren’t allowed to lose and yet here we are, all waiting with bated breath to see what happens after the Decimation. The Russo brothers certainly did a great job balancing so many individual characters, story-arcs, and personalities. And most importantly, they allowed a genocidal maniac retain a level of sympathy through it all, which seems like a strange compliment but really illustrates the directors’ vision to give the villain depth. As far as event films go, nothing has ever come close to the excitement level of this one…until this coming April.

1) Spider-Man: Into the Spider-Verse

Not since 2009 has an animated movie made its way to the top of my “Best of” list but no other film of 2018 is more deserving of the top spot (that I’ve seen; remember my disclaimer) than Spider-Man: Into the Spider-Verse. The film is surprisingly emotional throughout and is certainly Sony Pictures Animation’s most mature film (this is the company that produced The Emoji Movie, where poop was an actual character). Additionally, the animation is a masterpiece. The unique way that the animator’s pay homage to all the various styles not just of the different characters but to the world they inhabit is brilliant.

The voice-acting is top notch, especially by Shameik Moore as Miles Morales and John Mulaney as Spider-Ham. Even Nicolas Cage is well cast as the brooding Spider-Man Noir. The thing that allows this film to stand out in a year dominated by great comic book films though is its story. While the other films mostly rely on the characters to carry it, this is truly about world-building in a way we haven’t seen in a Spider-Man movie to date. Here we get to see, like in Captain America: The First Avenger, the hero Spider-Man’s impact on the “real” world, paralleling the impact the character has had over the years. Having lost both Steve Ditko and Stan Lee this year, this is the perfect send-up of their creation.

What do you think of Josh’s Top 10 for 2018? Let us hear your thoughts in the comments below!