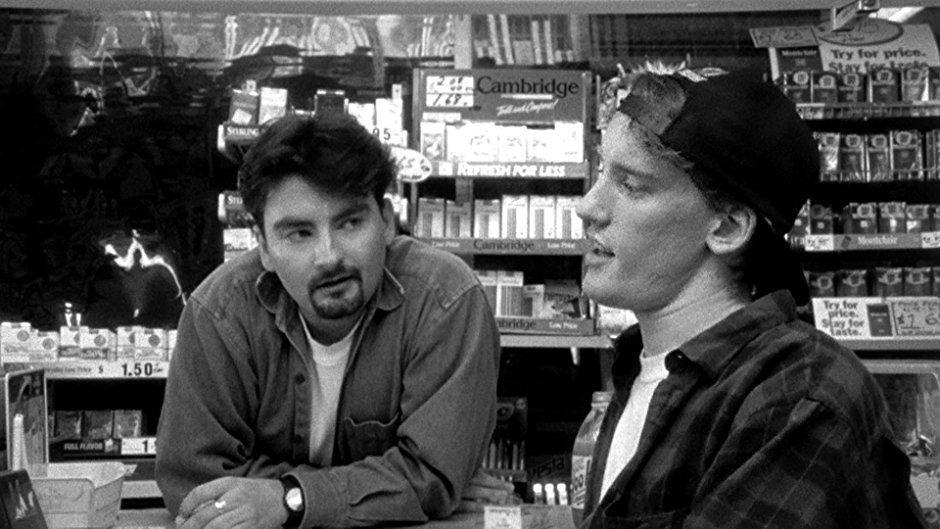 With the Sundance Film Festival well underway, I decided to jump in the time capsule and check out what the festival looked like 25 years ago. While it was not anywhere near as large as it is now, the fest still boasted a few of my favorite films. It may shock you to hear this, but Clerks made its debut at the festival a quarter of a century ago. Shocking, yes, but its true. Thus began the career of one of my favorite directors, writers and commentators Kevin Smith. To put it simply, Smith has always embraced the miracle of his career, and rather than looking down on others, has always tried to lift all boats. The man remains a legend, and his film Clerks has well earned its place in film history.

For those who have missed Clerks, please go check it out right now. Smith crafts the story of a young employee at a convenience store and turns it into a figurative descent into hell. Don’t let his silly facade fool you, Smith named his lead Dante (Brian O’Halloran) for a reason. The black and white film helps sell the timelessness of the story, and considering how ridiculous fashion looked in the 1990s, this helped crystalize the story. A bevy of weird people come through the shop, including Dante’s friend Randall (Jeff Anderson), who might be one of the three or four funniest characters of 90’s cinema. Dante receives visits from current girlfriends (Marilyn Ghigliotti), former girlfriends (Lisa Spoonauer), and of course, the infamous Jay (Jason Mewes) and Silent Bob (Smith). If you squint hard enough, frequent Smith collaborators Scott Mosier and Walt Flanagan also appear as various patrons of the store.

Smith captures a picture of the moment in the mid-90s, and sadly time is cyclical. Part what helps Clerks stand out today is O’Halloran’s frustration with where is life has gone, or rather the lack of places his life has gone. For a generation stuck under established workforces that remain planted in their positions, the message still rings true. That moment in anyone’s life where they’ve felt directionless has never been limited to a single generation. Yet for millennials like myself, nothing rings truer.

Smith also imbues the raunchy comedy of the era into the script with a flagrant disregard of where the line should go. From the moment O’Hallaron leaves his house, the line has been crossed. This film added to the lexicon, both for good and ill, with the creation of vulgar yet hilarious terms. Smith works extremely well as a director in this film, working his best to ensure that the slice of life feels as natural as possible. For service industry employees, Dante’s day feels standard (perhaps with the exception of the corpse in the bathroom).

The entire cast yucks it up, but Anderson and Mewes really shine through. From the get-go, both appear on screen with energy and excitement worthy of recognition. Count me as one of the zealots who believes Anderson should have received an Oscar nomination for his work. Was he a guy goofing off? Yeah, absolutely. Yet there’s a naturalism that feels impossible to replicate. Most raunchy comedies can never find that, and Clerks is better for him being in it. With Mewes, his commitment to the bit remains a high water mark in stoner comedy. While Smith may not have personally indulged until later in life, Mewes lives and breathes his Jay character. There was a reason that he became one of Smith’s trademark characters, and its entirely due to Mewes’ commitment.

Nothing I can write about Clerks will be new or revealing. It remains one of the ultimate independent success stories, as well as a cult sensation. Clerks still rules to this day. This remains Smith’s masterpiece, and demands our attention 25 years after its premiere, just as it did when it released. Here’s hoping the return of Jay and Silent Bob in the near future gives us something to cheer about.

What do you think of Clerks? What is your experience with the film? Let us hear your thoughts in the comments below!

Check out our other reviews here!