Big Mouth has already laid the groundwork to be considered one of the very best animated shows on television. The sex-ed comedy has found a way to tell the horrors of going through puberty in endearing stories. The Nick Kroll run production has found a way to spin these stories into comedic and fun tales, rather than turning them into terribly embarrassing moments. The show is vulgar, ridiculous, and downright silly, following in the wake of the South Park and Family Guy style animated films. While Big Mouth mostly features on Netflix, the show released a special Valentine’s Day epsidode, and it easily ranks up there as one of the best episodes of television surrounding the holiday. 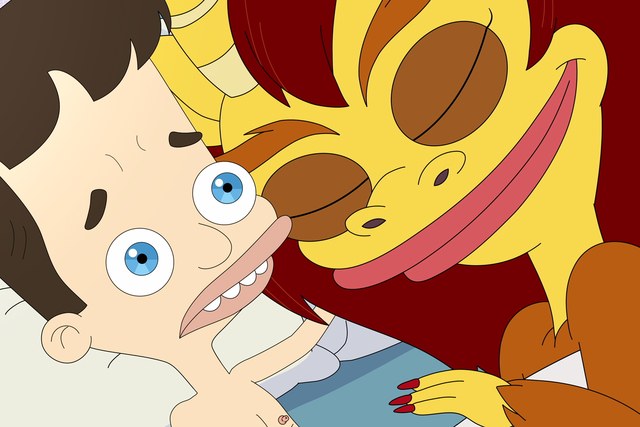 What makes the episode work so well is that it advances plot, while still paying homage to other pop culture touchstones. The episode sets up as if it is a parody of When Harry Met Sally, having interviews with the kids and the Hormone Monster (Nick Kroll) or Monstress (Maya Rudolph). The central stories revolve around four of the kids. Andrew (John Mulaney) trying to play it cool for his girlfriend Missy (Jenny Slate). Meanwhile, Nick (Kroll) navigates having a female hormone monster (Rudolph). Jessi (Jessi Klein) goes out with her gay bff Matthew (Andrew Rannells), who tries to navigate being gay in a town that does not seem to have any other LGBTQ kids. Finally Jay (Jason Mantzoukous) has to figure out how to deal with his own sex problems (easily the weirdest storyline). As always, the show finds extremely specific gems throughout. The humor definitely comes from a specific experience, and that helps sell its universality. The double episode also features tons of cameos from the side characters. Perhaps the best joke involves a love triangle for the Ghost of Duke Ellington (Jordan Peele). The characters grow emotionally over the course of the episode, and in some cases, stunt their grown because they can’t control themselves.The show also takes a big step forward with its LGBTQ+ characters, allowing them to get legitimate storylines. Between the end of last season and this episode, it is clear that Kroll and his team are transitioning Rannells into an important piece for the show moving forward. This was a great one off episode for new viewers, as well as die hard fans of the show.

Overall, you know what you’re getting when you watch Big Mouth. It remains one of the most vulger and ridiculous shows on tv. However, it is undeniably one of the funniest. You can blast through this episode in under an hour, and the show as a whole in a  day. Trust me, it’s worth it.

What did you think of the new episode of Big Mouth? Let us hear your thoughts in the comments below!