There are plenty of properties in the Disney vault that could be remade. With decades worth of stories, including short films and animated classic, the company holds some very strong IPs to explore. With Sleepy Hollow, entire segments of Fantasia, or even The Ballad of Pecos Bill, the choice to remake their modern classics always struck me as odd. Now, with the release of two Disney Renaissance films within six months of each other (they were separated by 19 months when they released in their original forms), the production of Aladdin seems to be in dire straights. 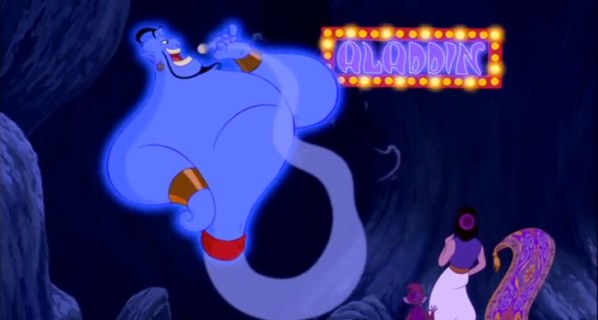 Let’s all be honest for a minute. This movie is going to make money. It may not a billion dollar enterprise like it could have been if it were to release in 2020. Still, it will pull in some serious dough. The problems around the film seem to have centered on big blue Genie, played by Will Smith. The image of the genie in question may not admittedly be the best conversation we could have hoped for. Yet the Twittersphere is blasting this film that was always going to be made in some version. Here is the problem. There was never going to be a delicate way to handle this story because of the tragic ending of Robin Williams.

Williams suicide in 2014 was a landmark pop culture moment. It brought depression to the forefront of the conversation about actors and comedians, and really opened up dialogue on the subject. Williams found a way to endear himself to generations of fans, easily becoming a comedy icon. His standup could be scathing, his impressions legendary, and his manic energy could never be replicated. When he chose to dive into dramatic performances, he could capture an audience. He was arguably one of the five best dramatic performers in the world when he was going for it. His role in Aladdin might have been the single most deserving vocal performance of receiving an Oscar nomination. 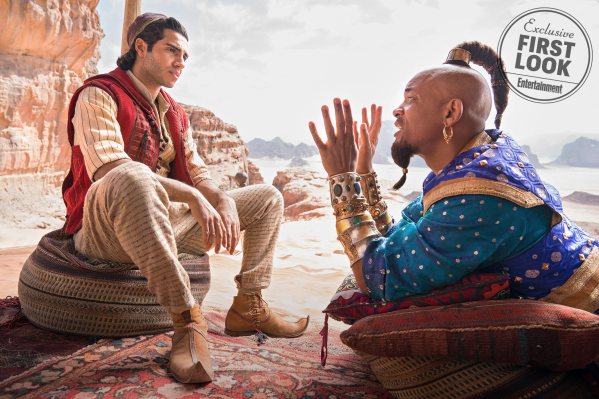 This is where the abundant issues begin for Aladdin (2019) a film that had to make up a lot of ground for the problematic issues of the original movie anyway. It has become clear that very few moviegoers or outspoken twitter audiences like how Will Smith looks as the Genie. The blue is weird, but here’s the thing: people were upset when he was not blue 3 months ago when EW released the first image. So which is it? Are we scarred by the blue Genie as so many people have joked? Or are we annoyed he’s not blue enough? For reference, here are side by sides of Smith and James Monroe Inglehart. Inglehart won a Tony for the role of the Genie on Broadway, and the show became a runaway success.

The first is Smith’s Blue Genie versus Inglehart in costume.

Now here’s a look at the character in his Entertainment Weekly cover against Inglehart again.

Frankly, they are not very different. If I had to guess, the majority of the film will not have Smith covered in blue. So now we get to the heart of the issue. Audiences don’t want to see this character on film, no matter who would play the Genie. There are almost no actors in the history of entertainment that could have matched Williams’ energy level. However, a committed and excited Will Smith might be as close as we’re going to get.

I’ve watched Bad Boys 2, Men in Black, and Independence Day more times than I can count. No one else could be a more worthy successor of Williams’ character than Smith. He can sing, he can dance, he can carry the film, and fade into the background when he needs to. Here was a list that ScreenRant compiled a couple years ago, and none have the charisma needed to pull off the role.

Obviously, the cynic in all of us believe they should have left the movie alone, but there are legitimately good reasons to have remade this movie. The original was undeniably problematic for its depiction of race. This was especially true when they made all the dark-skinned characters evil or downright incompetent. Meanwhile lighter skinned characters Aladdin, Jasmine and the Sultan are shown as good, or at worst, childlike. Second, sections of the opening song had to be rewritten for the home release of the movie. Disney got so many complaints about the xenophobia within the lyrics (remember this movie came out after the Gulf War), they had to alter the movie.

Third, the culture that the film could depict had the ability to rise to the heights of Black Panther and Wakanda. Rather than have to play terrorists for the hundredth time because Hollywood has always viewed Arabs in film this way. Instead, they could help build a city and a culture. Naomi Scott and Mena Massoud could become icons. Imagine what that could have meant to thousands of people with Middle-Eastern background. Agrabah legitimately had the ability to become something just as important and special to an entire generation of kids. This might be one of the best properties, up there with Mulan, for the company to actually remake.

Sadly, when I watched the Grammys trailer, I saw a dozen issues that bothered me, and none of them had to do with The Genie. The CGI in this movie looks horrendous. Even the large scale backgrounds look bad. The actors, outside of Jafar (Marwan Kenzari) and Genie, get no lines. The film looks almost like a shot for shot remake, yet nothing is as crisp or memorable as the original. Guy Ritchie, coming off one of the weakest films of his career, probably was not the best choice. Perhaps a director like Haifaa al-Mansour may have been a better choice. Instead, the internet focused its rage on Smith and the Genie.

I’ve heard some point out that the character doesn’t have to be in the story. However, I truly believe that many would see this as an insult to Williams as well. It comes down to how Williams died. I don’t believe that there was any way to salvage this movie from the moment he took his own life. The character became his signature performance and a time capsule of a happier time. That is what endures for many of us kids who grew up during the Disney Renaissance. Now that Williams is no longer with us, Disney was damned to put Genie in the movie, damned if they never turned him blue (because now its seen as an homage to Williams), and damned if they cut the character altogether. Disney entered into a lose-lose-lose scenario and we are seeing the effects of that choice today.

As it stands, Aladdin will release on May 24, 2019. There’s not a chance that Disney moves off that timetable, because this movie is likely exactly what they want. Parts of it look amazing, and the costume work from Michael Wilkinson look on point. However, the anger and outrage about the Genie showcase that Disney was ultimately trapped by its own strategy.

What did you think of the trailer for Aladdin (2019)? Are you excited for the film? Let us hear your thoughts in the comments below!