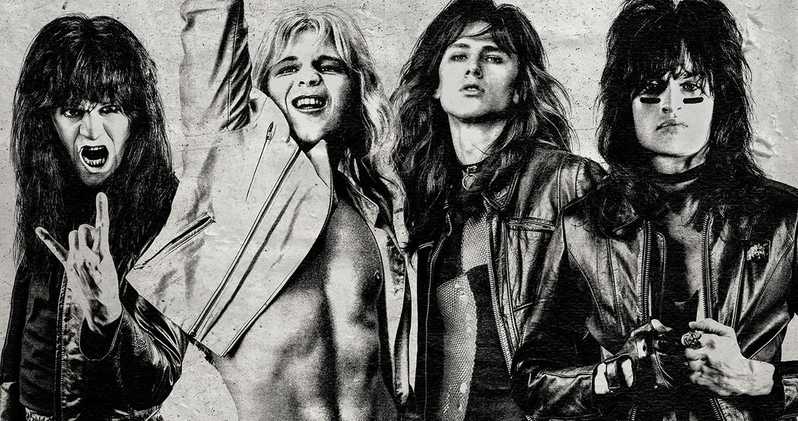 Growing up in the mid-2000s, classic rock and ’80’s metal became the bedrock of my musical foundation. AC/DC, Aerosmith, and Guitar Hero tracks blasted through the speakers of my ’77 Malibu. A band that certainly made the rotation was Mötley Crüe, who I got to see perform live in 2006. To say I was a fan might have been an overstatement, but when it was announced that The Dirt would receive a Netflix adaptation, I was certainly curious.

On one hand, I salute Netflix for not necessarily sugar coating the details of Crüe’s time at the top. At the same time, director Jeff Tremaine (best known of Jackass and Bad Grandpa) delivers a biopic that will only appeal to hardcore fans and frat bros. This might be the very worst movie of 2019, not just for its frustrating acting, poor script, or messy production work, but for the inability to find a consistent tone.

The Dirt begins with an infamous scene from the book. Tommy Lee (Machine Gun Kelly, credited as Coulson Baker) goes down on his girlfriend in the middle of an X-rated party. Meanwhile, Nikki Sixx (Douglas Booth) gets high, Vince Neil (Daniel Webber) has sex in a bathroom, and Mick Mars (Iwan Rheon) secludes himself from the chaos. After a “climatic” finish to the scene, we get the stereotypical rollout of a musical biopic. The band meets one piece at a time, they write “music that has never been heard before,” they’re signed, and the drug-fueled parties begin.

The depiction of each character matches up with each of the member’s public personas for the most part. Casting Baker as Lee works at times, with him bringing the drummer’s boyishness to the screen. However, it quickly runs out of charm, and Baker cannot handle the heavier moments. As Lee hits women, cheats on Heather Locklear, and does far worse things, you just get the impression that Lee is a scumbag.

Booth plays Sixx like the drug-addled bass player he was. There’s not much more to the performance than that. He does get the film’s best scene when Sixx dies of an overdose. However, he has little to do with that, as he plays a corpse while the EMT plunges two adrenaline needles into his heart. While he gasps for air, the two EMTs high-five. This is easily the highlight of the entire film.

There are times when Webber gets to be the best part of the movie because he slightly sobers up after killing a fellow musician in a DUI (Neil served less than 20 days in jail for the killing). However, the movie does not do him any favors when depicting the tragic parts of his life. The storyline featuring his daughter needed further development to hit our emotions as an audience. When she tragically dies from stomach cancer, it feels like Webber pushes the performance too far in an attempt to become a grieving father. He has the toughest road to walk, but the movie undercuts him by juxtaposing his pain with the continued shenanigans of the band.

Rheon stands out as the only legitimately great performance of the bunch. He gets to be the “weird” guy in the band and fulfills the role wonderfully thanks to his blank facial expressions and wide eyes. He also delivers a sense of purpose to the group, and never seems into the debauchery. Instead, he is shockingly focused on the music, unlike anyone in the band (or the movie for that matter). By not beating or sexually using women, he also becomes the only guy you root for.

There are some roles cast for people in the Mötley Crüe circle. David Constable is one of the better pieces of the ensemble, playing the band’s manager. The film notes that Crüe had two in real life, and they feel bad for cutting out the other guy, but it does it anyway. Constable tries his best in the role, but poorly written dialogue holds him back from being at his best. Scenes with Pete Davidson as a record executive are hilariously awful, with Davidson being asked to simply deliver lines like “not even the Beatles own their music” and “do you want a record deal?” Davidson is severely miscast in the part, and rather than tell jokes, he is used as the punchline.

The screenplay is a tonal mess that feels more like a series of vignettes than creating cohesive threads. Again, it wants to show all the drug use, sex, and insanity that came with Mötley Crüe. That’s fine, but there are ways to develop characters within those scenes. Instead, we’re told a story about the time Ozzy Osbourne snorted ants and licked Tommy Lee’s pee off the floor. There are copious amounts of voice-over work, from not just one member of Crüe, but all four, as well as Davidson and Constable. The Dirt thinks it is the Deadpool of musical biopics. It rarely inspires a chuckle.

The Dirt also holds contempt for the very factors that made Mötley Crüe a household name. It begins by hating on the 1980s as a decade, MTV, and the record industry. Despite the fact that there’s no other time in history when bands like Crüe would have been popular, The Dirt tells you they would have made it anyway. Most frustrating of all, it pushes the very music you want to hear to the side. Why see what lead to “Smoking in the Boys Room,” or “Home Sweet Home” when we can get Tommy Lee running around a hotel in his underwear. The lack of self-awareness about the things that made the band so popular is startling.

Perhaps the biggest issue with The Dirt is that it wants to convey polar opposite messages. On one hand, it wants you to believe that Mötley Crüe is the greatest, coolest, most extreme band that ever lived. It then also wants you to believe they regret their actions but were saved by coming together. The tonal extremes are something The Dirt can never marry. If we want to go from Point A to Point B, we need real groundwork. Instead, we’re just supposed to accept it.

If there was ever a point where we saw them struggle on the way up, or be there for each other in a real way, maybe this could have landed. Instead, the privilege of being white rock stars shines through. There are seemingly no consequences for their actions as they kill, maim, or hurt people around them. They beat women, and others are placed in the film solely for the purpose of adding nudity. Why would I want to root for these people to be happy? The movie never gives me a single reason.

Finally, the actual craft work is noticeably subpar. It never feels like we’re in the 1980s, but instead that the cast dressed up for Halloween. At a time when there is more content that salutes the 1980s than ever before, this really stands out. The haircuts may be authentic to the time, but the way The Dirt is shot and the sets are dressed, it feels like a high school production of the story. Maybe that speaks more to Mötley Crüe’s circles, but for a film that takes place in a very specific scene and time. The world couldn’t feel less immersive.

The Dirt crumbles under the pressure, and cannot find a meaningful story to tell about Mötley Crüe in 2019. It falls into the tropes of the musical biopic but ignores music through most of the story. Somehow, it is too serious about the band, yet too focused on playing out their greatest gags. For a movie that many fans have wanted for years, the Mötley Crüe biopic feels like a frustratingly boring and dumb depiction of the group. Worst of all, it makes you feel ashamed that you ever liked them in the first place. This one is for hardcore fans only.

What did you think of The Dirt? Let us know in the comments below!

Stream The Dirt now on Netflix.

Check out our other reviews from We Bought a Blog here!

0 comments on “Review: ‘The Dirt’ is a Gross, Despicable, and Frustrating Bro Film”