While away on my Japanese excursion something incredible happened, Netflix finally released the iconic Neon Genesis Evangelion to a wide American audience for the first time since Toonami did back in 2003.  NGE is such an incredible watch that I was shocked to see that there was some drama brewing on the Twitterverse.  The thing is… it comes with an all new english dub and this dub has been getting some real hate from the anime community writ large.  Some of the criticisms are fair, some are silly, and some are seriously troubling to say the least.  As this site’s resident weeb, I wanted to go through the list of criticisms I’ve been seeing across the net and give my Hot Takes™ on the matter.

First caveat: Japanese + English Subs is the superior way to watch anime.  Y’all been watching Dany speak Dothraki for 8 seasons.  Get over it.
Second caveat:  Dubbing an anime is an incredibly arduous task.  It’s so hard to match the vibe of the original Japanese voice actors, regionalize cultural refrences that Americans probably wouldn’t understand, not to mention having to convey subtle nuances in dialogue from one language to another.  With Neon Genesis Evangelion however, it’s important to note that Netflix already had an English dub available to them, one that was very well received. This means that every change Netflix made was done deliberately for reasons. Reasons we may never know. With that being said let’s get started!

(Spoiler Warning – Go watch this incredible anime.  You have no excuse)

Criticism #1 – “Character X’s voice sounds different! I hate it!”
There are some stark differences between the voice acting in the two dubs the difference that is causing the most waves being Shinji (main male character for you non-weebs). You can hear the difference clearly here: @ 0:40.

To me, the Netflix voice work is so much more full of life compared to the original.  Characters seem so much more stiff in the original dub and ironically, the voices don’t necessarily match well with the characters or the moment.  The biggest complaint about Shinji’s new voice is that it is distinctly softer which I don’t necessarily think is a bad thing.  Shinji is incredibly shy and insecure, so it seems that Netflix wanted that to show this in his voice. It’s an artistic choice and I respect it. Of all the English dub VAs this is not in the realm of the worst (shout out to David Henrie for his truly awful VA work in Secret World of Arrietty).

If you watched the above video to it’s end you may have stumbled upon the second biggest criticism; the removal of the iconic rendition of the “Fly Me To The Moon”. The removal of this song from the end credits has earned the ire of devoted anime fans world wide.  Widely seen as one of the most iconic end themes of all time, there had better be a good reason for its removal.  While there is no official reason coming from Netflix, there are some obvious hints that it has to do with copyright issues. The biggest of which being that the song is still there for everyone watching Netflix outside the US.  The question is; did they not get the rights because they were denied, or because they didn’t want to pay for them? Either way, losing the song does suck, especially just in the US, over what is probably just a silly rights dispute. Hooray for VPNs!

In the original anime, the character Kaworu is a late addition to the show, but he quickly befriends Shinji and their relationship blossoms into something that many  fans interpret having some serious homosexual subtext.  NGE was the first time I remember seeing a quasi-gay relationship in any sort of media. Or at the very least, it was the first one that had a serious impact on me.  Many fans of the original anime claim that Netflix has completely changed the nature of this relationship with a new script and are trying to de-gay the characters.  Here are the changes (left OG, right Netflix) 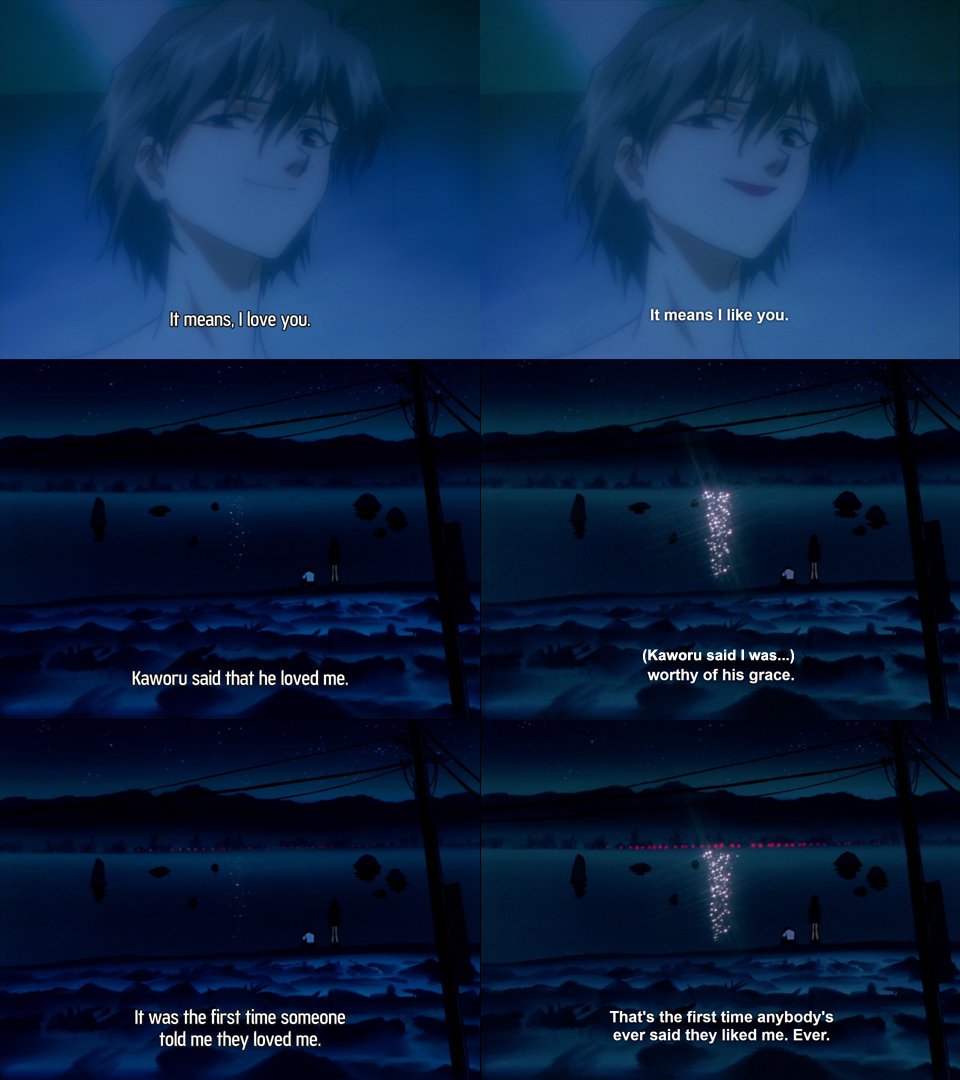 Big. Oof. That certainly comes off as subdued to say the least. One of the theories here is that they wanted to make it even more subtextual and less overt. Problem is that queer representation is almost always subtext and almost never overt. In the original translation, it felt like Kaworu was clearly queer and clearly into Shinji, but it was Shinji who needed to figure out his sexuality. This ties into the bigger themes of finding one’s self and trying to wade through all the teenage hormones. Removing the queer aspect from this discussion limits it and makes the more womanizing aspects of Shinji seem incredibly polarized to only one end. We lose the nuance in Shinji’s search for self. Unfortunately that search for self ends with… uh…. 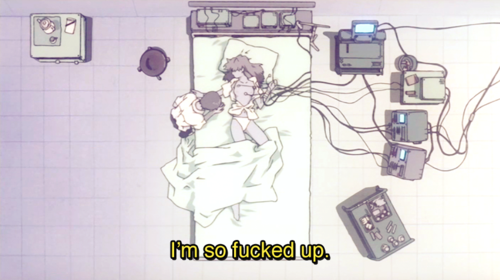 Netflix has censored all of the naughty words from the original show.  That picture above is the most egregious example and is from the original anime.  Seeing as what just transpired I’m pretty sure the profanity is warranted.  The new line is “I’m the lowest of the low” which, I guess has the same technical meaning, but you can’t deny it lacks the raw emotion to meet what’s going on here.  I’m not sure why it’s okay to all-but-show Shinji jerkin’ off to an exposed and unconscious Asuka but draw the line at saying a no-no word.  I often use this show as an example of how there are some cartoons that aren’t for kids, and Netflix certainly isn’t marketing this towards kids, so I’m unsure why there’s a problem with dropping an F-bomb or two.

Final Verdict: Yeah, the new dub isn’t the best, but it is introducing NGE to a whole new generation. Hopefully it will lead them to discovering just how great the original dub is. Or even better, that Sub>Dub.

1 comment on “Is The New Evangelion Dub Really That Bad?”