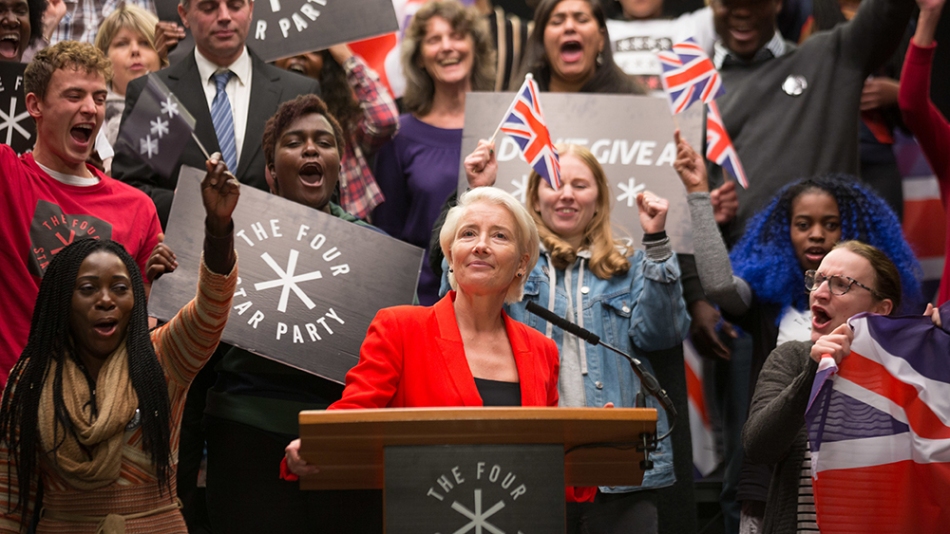 It feels like every day is more saturated than the last with tragedies. The sensation is not unlike that of whiplash, a physical failure of the body and mind to adequately keep pace with the sheer barrage of information that is spewed on to the world stage with alarming frequency. Daniel Tovy’s character Danny in the new HBO limited series Years and Years scrapes at this very raw nerve of mine rather quickly, with a manic monologue delivered just minutes into the first episode at the birthing of his niece: “But now? I worry about everything. I don’t know what to worry about first.”

Starting off in the year 2019, Years and Years capitalizes on that sense of feeling helplessly overwhelmed by the world. Breakneck is perhaps too mild a descriptor for the story that plays out over just six episodes. Five years transpire in a blistering montage in the first episode, with each consecutive episode involving smaller jumps forward. In total we see a decade of time played out over the course of the series. It centers around the Lyons family, a lively and mostly lovable cast of characters who serve as our grounding point over the course of this ten-year tale. Through their individual journeys we see the toll that this alternate future takes upon each of them as a microcosm within greater waves of increasing turmoil. We witness their joys contrasted against the unrelenting collapse of the world around them. The family must contend with vulgar shock politics, rising nuclear tensions, a Ukranian refugee crisis and uncomfortably pertinent technological developments. And that’s all just in episode one.

Here I must admit to a certain sense of masochism: you have to be comfortable with a certain level of feeling uncomfortable. In the time I spent viewing Years and Years there were numerous occasions where my girlfriend would catch a scene and throw her hands up in discomfort, not from the quality of the show itself but from the uncanny chill that the plot often invokes in the viewer. You are never far from the fact that no part of the history invented by Years and Years feels implausible. Quite the opposite is true: at all times, the series feels far too close to reality. There is certainly a dark sort of thrill to bearing witness to this, but it’s much more than that. It is a warning, barely dressed at times. Some may find this distasteful, unpleasant, perhaps unviable as a method of escapism due to its cunning similarities to everyday life. But it is hard to deny its pertinence, even its importance to those with the courage to listen.

That isn’t to say that Years and Years is a tragedy. Indeed it is a triumph, the persistence of these characters in the face of so much adversity. Most every character goes through an arc that feels satisfying and cathartic, and despite the onslaught of dismay the Lyons family continues to charm throughout, taking happiness where they can find it. It is these moments of tenderness, from drunken family barbecues to moments of sibling camaraderie, that provide the necessary balance. Performances by Rory Kinnear, Jessica Hynes, Ruth Madeley and Russell Tovey all wonderfully portray a set of four beleaguered siblings who are doing their best to find hope in a world that too often feels hopeless. Years and Years is also a story about generational gaps, and we see this most clearly in the relationships between the four central siblings and both their grandmother Muriel (Anne Reid) and their own children. Lydia West easily gives the strongest performance of this younger generation as the quiet, wickedly intelligent Bethany. Credit is also due to series writer Russell T. Davies, who crafted a story with just the right blend of real world detail and inventive futurism. He absolutely nailed the tone in a way that lends this story its incredible levels of realism and depth.

If all of this sounds like a lot to be handled over the course of only six episodes, it is. Years and Years is ambitious in the scope of the orchestra that it conducts, with all of the separate threads eventually weaving into an immensely satisfying conclusion. This ambition does come at a cost, as certain characters get left by the wayside and some threads feel less balanced than others. This slight unsteadiness never threatens to sink the ship, however, and the arc of the plot feels largely satisfying. One certainly has to respect the sheer economy of storytelling at play here, for there is very little wasted space. The show does a great job of carving the maximum amount of impact out of its relatively short span. It can be hectic and messy and overstuffed, at times a bit too much. I would argue that anyone uncomfortable with these concepts has probably selected the wrong planet to inhabit.

0 comments on “Review: ‘Years and Years’ Deals in Beautiful Discomfort”