During the mid-2000s, animation studios began to misunderstand why their films were bombing. As Pixar continued to thrive, thanks in large part to the wonderful stories they were telling with Finding Nemo, Toy Story and The Incredibles leading the way. Meanwhile, Disney and Dreamworks released bomb after bomb from their hand-drawn departments, while Shrek went on to become the highest-grossing animated film at the time of its release. The studios almost entirely shut down their hand-drawn features (with a couple notable exceptions), and moved entirely into CG animation. Rather than blame weak story-telling (with films like Home on the Range and Sinbad: Legend of the Seven Seas rarely inspiring future generations of cinephiles), hand-drawn productions were kicked to the side.

While hand-drawn animation remains vibrant outside the United States, thanks in no small part to Studio Ghibli and GKIDS animation, American audiences are rarely treated to these kinds of films. That makes Netflix‘s Klaus something of an exciting proposition. The streaming service entered the animation business over the weekend, releasing its first in-house animated film about a postman (Jason Schwartzman) who helps create the legend of Santa Klaus (J.K. Simmons). While the story can feel straightforward and predictable, Klaus earns its stripes because of the beautiful animation on display. For Netflix, it represents a brave new venture that could simply be addressing a market inefficiency. At the same time, it revives a medium that has only seen a handful of releases over the last decade.

Klaus‘ story may not be overly complex, but it packs an emotional punch. As the young postman Jesper (Schwartzman) enters a Seussian feud, he quickly questions his mission. Sent by his father to the equivalent of a Siberian outpost, Smeerensburg represents an untamed, violent world. The town’s key families fight to the death on a daily and weekly basis, simply because they’ve always done so. With bonds broken, Jesper cannot deliver the 6,000 letters his father requires from him. He risks being exiled, cut-off, and leaving behind his privileged world. However, after he accidentally creates a bond with a toy-making woodsman named Klaus, the two begin to thaw the negative attitudes of the children in town. As their tales continue to grow, the legend of Santa Klaus is born.

Director Sergio Pablos, a Disney-animation veteran, never attempts to pull the wool over the audience’s eyes. The feature reveals the end-results of Jesper and Klaus’ adventure within the first thirty seconds. However, Pablos and his team deliver a satisfying tale that keeps you engaged in the events, thanks in part to the gorgeous animation. Using new lighting techniques and stylized hand-drawn characters, the glossy characters sparkle to life. Reminiscent of Tarzan and Treasure Planet (both of which Pablos worked on), the design work creates appealing and compelling characters. Playing with the physics of its characters and the landscapes, the world of Klaus quickly expands with dozens of unique and differentiated characters.

Additionally, the use of northern landscapes provides ample opportunity to create picturesque locales. Time after time, the shots feel like concept art come to life. The characters pop off the screen and the images evoke emotion. The snowbanks feel tangible and timeless. Even the blocking of characters within the frame feels more at home in an independent cinema than in an animated feature. These shots add to the beauty of the setting while validating the hand-drawn aesthetic used to bring the characters to life. 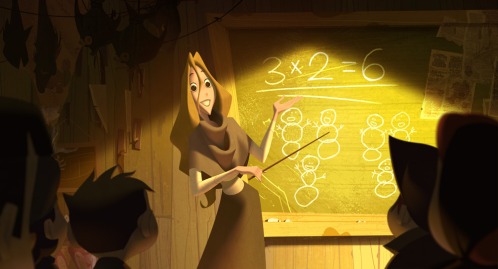 For Netflix, the road forward will be interesting. They not only developed Klaus in-house but purchased the critically acclaimed French film I Lost My Body at the Cannes Film Festival over the summer. The two features pack an excellent one-two punch, showcasing hand-drawn animation to large audiences. This may even result in surprise Oscar nominations for the studio. While they have CG animated features in their future slate, there are also numerous hand-drawn features on the horizon. Should Klaus and I Lost My Body prove successful, not just among streaming counts but with critics, Netflix may have found their niche to stand out among the legacy animation studios.

Klaus ultimately brings a new spin on the time-honored “how did Santa become Santa” Christmas trope. While there are literally dozens of movies that tread similar ground, Klaus stands out as an emotional tale with gorgeous animation. It packs a powerful message and creates goodwill that resonates with the world today. Sometimes it’s the simple messages that need to be heard the most, and Klaus earned its place in my Christmas rotation for years to come.

What did you think of Klaus? What does this mean for Netflix animation? Check out our other reviews from We Bought a Blog here! Check out AJ’s Letterboxd to keep up with what he’s watching!

2 comments on “Review: ‘Klaus’ Brings Netflix Into the World of Animation”