There’s no question that the past five years have been kind to Taika Waititi. The director made Thor: Ragnarok a standout feature of the MCU. Waititi thrived in independent genre comedy thanks to Hunt For The Wilderpeople and What We Do In the Shadows. The director might be one of the best comedic directors of the decade, earning a place among the best creative minds in the industry. His latest, Jojo Rabbit looks to continue his meteoric rise in the culture. Unfortunately, the “anti-hate satire” misses the mark, limping through a high-end premise with disappointing results.

Jojo Rabbit builds off the graphic novel Caging Skies, but the two bear very little similarities outside the basic premise. A young boy, Jojo (Roman Griffin Davis) begins serving as a member of the Hitler Youth in the waning days of World War II. Jojo and his best friend Yorki (Archie Yates) attend a weekend camp led by Captain Klenzendorf (Sam Rockwell) and other Nazi soldiers (Rebel Wilson and Alfie Allen). Jojo is urged on by his imaginary friend, Adolf Hitler (Waititi) is injured in an accident. When he returns home to his mother (Scarlett Johannson), he discovers his mother’s secret hiding in their house: a young Jewish girl named Elsa (Thomasin McKenzie).

From the jump, Jojo Rabbit validates those who question the point of making a Nazi comedy. Sadly, Jojo rarely gets more than a chuckle out of its audience, making it a surprisingly dull piece of cinema. All the energy and jokes that Waititi layers through his other stories are non-existent this time out. Oddly, most of the comedy of the film comes at the expensive of its Jewish characters. Unlike true satires, such as Dr. Strangelove, In The Loop, or The Great Dictator, Jojo rarely points the humor at the villains of the film. Part of what makes Waititi a strong comedy director has always been his ability to skewer the type of film he’s making, while still playing within the genre. However, Jojo relies on the lowest common denominator humor, rarely offering his zany perspective beyond the initial hook of the film. 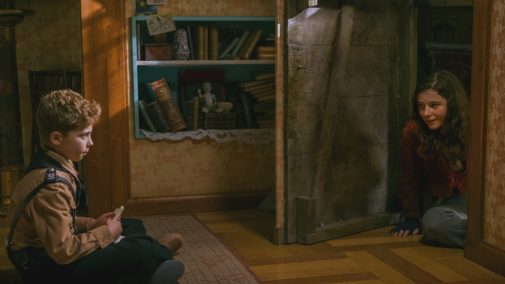 The juxtaposition between Jojo and his mother brings most of the modern-day commentary to light. A young boy, fanaticized by those who give him a place to belong, bears striking resemblance to the white nationist movements occurring across America. However, it creates problems from the word go for the rest of the story, and quickly exposes some of the weaker elements of Jojo. Waititi’s Hitler serves little point, and the story begins to function as an excuse of sorts for some who carry these ideologies. It’s not hard to read Jojo as a redemptive story about a boy swayed to a dark movement, but in today’s world should there be any redemption given to people who indulge or perpetuate hate? For every sweet moment we get with Jojo as a character, it is either preempted or followed by an action that would be considered despicable if performed by an adult. 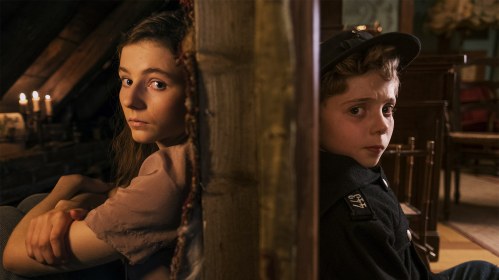 That is not to say that Davis is bad in the role. Far from it. If the young actor who portrays Jojo was not so likable, this movie would have struggled even more. Davis brings out some genuine moments of pathos throughout the film, and in doing so, steals your heart. For those who missed Leave No Trace last year, Thomasin McKenzie will come away as a revelation. The young actress blends intensity and fear into her performance as a young girl struggling for reasons to endure. Many of the most thrilling and emotional beats of the film lay on her shoulders, and her subtly creates empathy. Should anyone from the film find themselves in the Oscar conversation, McKenzie has proven herself a future star.

Johannson gives an excellent supporting performance. While her hope and earnestness can be at odds with the film, you find yourself wanting more scenes with her from the moment she first walks off the screen. She deploys a side of her we have not seen in years and quickly reminds you why she was once pegged as the next great actress. Last year I wrote about Green Book and said that Mahershala’s Ali performance tricked audiences into believing it was good. Davis, along with McKenzie and Johannson, do the same here. I would be remiss to not discuss Yates, who might be the most lovable character in the film. His chemistry with Davis instantly cheers you up, and actually helps deliver the innocence the movie believes its channeling.

The litany of supporting performances from the sprawling cast keeps you entertained throughout.  Rockwell delivers another solid role, even if it comes off as a muted version of other performances in his career. Rockwell has entered a new zone as a performer, once again harnassing his charm to win you over. Unfortunately, Allen is underused and Wilson stops the movie in its tracks. Both are more distracting in their roles than assets to the movie. Finally, Waititi delivers a perfectly fine performance as Hitler, but nothing about it comes as unique or new. It’s a big shot but does little to help the film reach its promise.

Ultimately, Jojo Rabbit comes off as a missed opportunity. Waititi will have great films. Whether through studio interference or simply pulling its punches, Jojo will not be one of them. Instead, it squanders a unique premise and delivers a perfectly serviceable, if not poorly executed film about war. Like an imaginary friend, we’ll move on from Jojo Rabbit with little reason to look back.

What did you think of Jojo Rabbit? Will it factor into the Oscar race? Check out our other reviews from We Bought a Blog here! Check out AJ’s Letterboxd to keep up with what he’s watching!