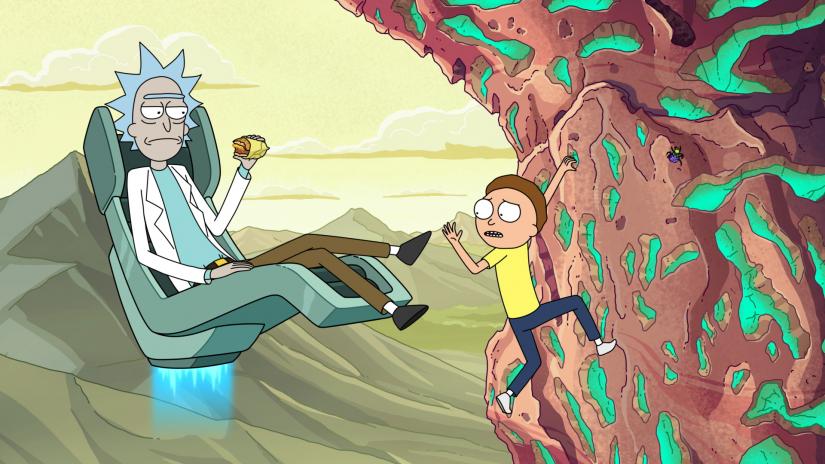 The rise of science fiction on television has offered unique opportunities for storytellers. For Justin Roiland, he not only accelerated the revitalization of the genre in the medium, but he took full advantage of his artform to tell ridiculous stories. Roiland, the creator and star of Rick and Morty, has created a natural successor to The Simpsons or South Park as one of the most exciting shows to tune into on a weekly basis. One of the few shows that can sustain critical praise and still have a rather toxic fanbase, Rick and Morty returns to television after missing for more than two years. As the Adult Swim title card reminded us, the wait would be well worth it. Through the first three episodes of the fourth season, that proves true. The tongue-in-cheek show continues to operate on a higher level than most thanks to its strong writing, fun characters, and ever-expanding base of characters.

To begin the season, the show has drawn from other genre stories to kick itself into high gear. The first episode followed Rick through multiple dimensions as he tried to return to his Morty (thanks to Morty’s accidental killing of Rick). As Rick fought off fascist teddy bears and shrimp, Morty used a crystal to keep his life on a path that would allow him to die with the girl of his dreams. Episode 2 follows more personal journeys. Morty gets tied up with his father Jerry’s (Chris Parnell) potentially world-ending app. Meanwhile, Rick seeks vengeance on a creature that used his personal toilet on a world of his creation. Finally, the latest episode follows the two adventurers as they dive into the heist genre. Unfortunately, Rick hates heists.

Roiland and his writing team have developed a finely tuned instrument to showcase their razor wit. While characters continue to go off on their own adventures, there’s still character development along the way. Morty’s relationship with his family and his exploration of life without them continues to create an interesting character arc. Morty often functions as the audience surrogate, and that use has served the show well. Rick’s own journey, particularly in episode 2 (“The Old Man and the Seat”), remains one of tragedy and loneliness. He remains one of the more unknowable and textured characters on television, allowing the benefit from his seeming omniscience to result in even more emotional gut punches. After all, if the man who knows everything can be emotionally disarmed, we all can.

This season, the show has been rather light on the core family, with Beth (Sarah Chalke) and Summer (Spencer Grammer) serving as background characters. With episodes for each of the characters likely on the way, the show has instead utilized its plethora of in-universe jokes to build out its humor. The return of the Meeseeks and Mr. Poppy Butthole (a real character), has given die-hard fans enjoyable cameos. Meanwhile, guest stars including Elon Musk, Taika Waititi, Sam Neill, Justin Theroux, Jeffrey Wright, and Kathleen Turner have found their way onto the series. The show’s ability to get us to buy-in on seemingly one-off characters has always been a strong suit of the show.

Overall, Rick and Morty has been more fun than emotional so far. Yet when the emotional gut punches have hit, they’ve been truly devasting. While the Emmy-winning third season does not have an equal yet, the series keeps building momentum that will surely pay off this season. While we’re not seeing the series operate at its peak, but even if the season stays at this level, it will be among the best animated programs on television. Don’t take Rick and Morty for granted. It’s taken too long to bring the show back from its most recent hiatus.

What did you think of Rick and Morty Season 4? Where does it rank for you when ranking each season? Can it repeat with the Emmys? Let us know in the comments below!

0 comments on “Review: ‘Rick and Morty’ Picks Up Where It Left Off with the Callback Heavy Season 4”