George Lucas had just come off the first critical and financial success of his career. American Graffiti was the first piece of nostalgia to resonate with the culture in any meaningful way. After all, the dissemination of popular culture had only really taken hold in the past thirty years with the advent of television. The movies had always been a way to escape the world, rather than return to the one we experienced day in and day out. American Graffiti commented on the Vietnam era by returning to a time before the war. It was a cultural sensation, one that turned Lucas into a wunderkind within Hollywood. With this juice, he pitched his blue-sky project: an epic set against the stars. 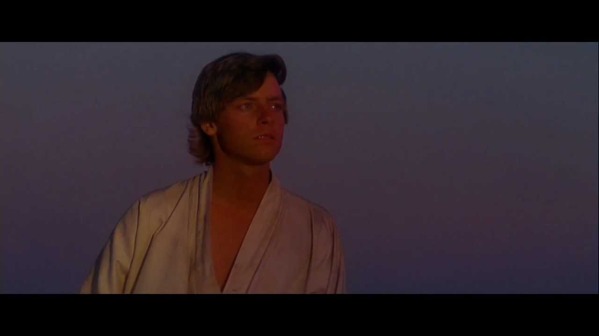 It’s nearly impossible to meet people that have never seen Star Wars today. We all know the iconic nature of the film, and how it changed Hollywood (for the better and for the worse). The beats of the first one remain ingrained within our culture. Much of the information present in the film has been colored by our view of the sequels that would follow. Yet the majesty of A New Hope cannot be underestimated. It sings from the first frames, dropping into an immersive world begging for exploration. It’s what makes new generations fall in love with Star Wars time and time again. 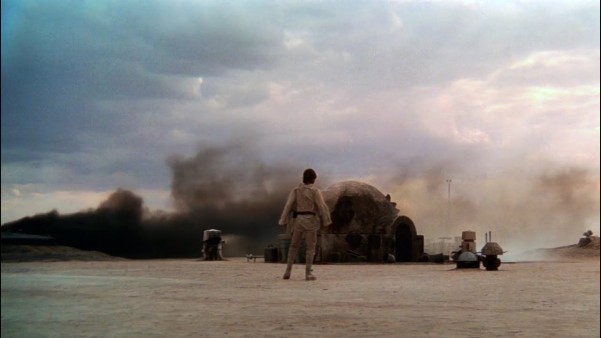 Unlike other films in the franchise, it’s pointless to recap A New Hope. After all, Lucas’ choice to blend science-fiction, the American Western, and philosophy gives the film a timeless foundation. Lucas’ own obsession with the monomyth, or Campbell’s Hero’s Journey, helps the film imbue life into the structure. His own history as a young man seeking something more gives Luke (Mark Hamill) his more interesting edges.

Lucas’ vision and ferocity to tell this story on his terms can be felt at every turn. His frustration with the Hollywood system makes this wholly unique. The mere concept of the Force adds a metaphysical and philosophical bend to the story many of the adventure serials did not prioritize. Beyond tacking on a desert planet, Lucas deftly handles the Western archetypes to provide a shorthand for each of the characters. Luke literally wears white and tan against the black armor of Darth Vader (David Prouse with vocals by James Earl Jones). Obi-Wan Kenobi (Alec Guinness) plays upon tropes of the old gunslinger, providing the universe with its own Rooster Cogburn. Like American Graffiti provides additional feelings of nostalgia, adding bountiful references to John Carter of Mars, Flash Gordon, and Dune sprinkled throughout.

Separating the big three from their iconic roles becomes impossible after A New Hope. From the moment that Harrison Ford appears on the screen, it’s clear we’ve found one of the great film stars of all time. He oozes charisma and sex. Ford’s cool as hell, but messy enough that you know he’s going by the seat of the pants. It’s no wonder that he became the biggest movie star in the world over the next decade. It’s all there in the infamous “Han shot first” sequence. However, he achieves a perfect blend of blundering idiot and comedic one-line machine during the Leia escape as he tries to divert suspicion over the intercom. 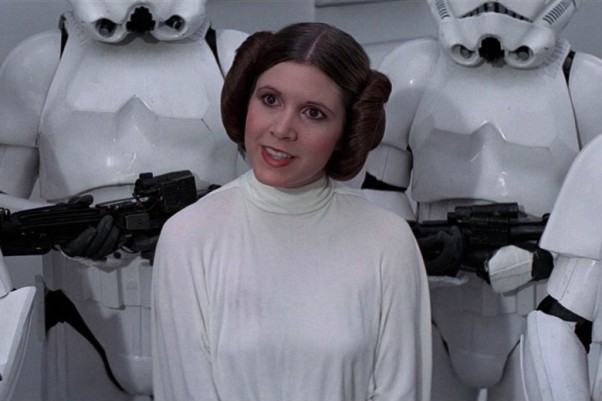 Meanwhile, Carrie Fisher gets to showcase her sly wit in every turn. For an actress in her early 20s, she expertly knows how to play each of the moments of comedy and drama. Sure, she throws on an accent while talking to the excellent Peter Cushing, but she holds her own. Her delivery remains iconic, creating feel a combination of sarcasm and frustration at her lack of power in a man’s world. It’s a subversive performance that earns its iconic status.

Hamill remains the weakest link, but he provides the perfect cipher for the audience. He brings an everyman quality to the role that helps bind us to the story. He must not only make character choices but guide us into the events of the story. It’s a tough ground to walk, but there’s a reason that Luke sticks with the audience. As he looks across the desert to the binary sunset, Lucas hones in the universal nature of the story. The search for where we belong will always consume us.

There’s no heap of praise that I can write that hasn’t been said about A New Hope before. It remains a masterpiece, even as Lucas added in subpar material. The rules of the world make sense from the word go. The story can stand alone, even as it launched the greatest cinematic universe. Star Wars began as a story that paid homage to what came before while forging its own path into the future. That was the power of its story, as a story that dared to voyage into the unknown.

What did you think of Star Wars: A New Hope? Let us know in the comments below! Check out the other Star War rankings here!

1 comment on “Ranking ‘Star Wars’ – #2 – ‘A New Hope’ Launches a Phenomenom, Based in Classic Storytelling”