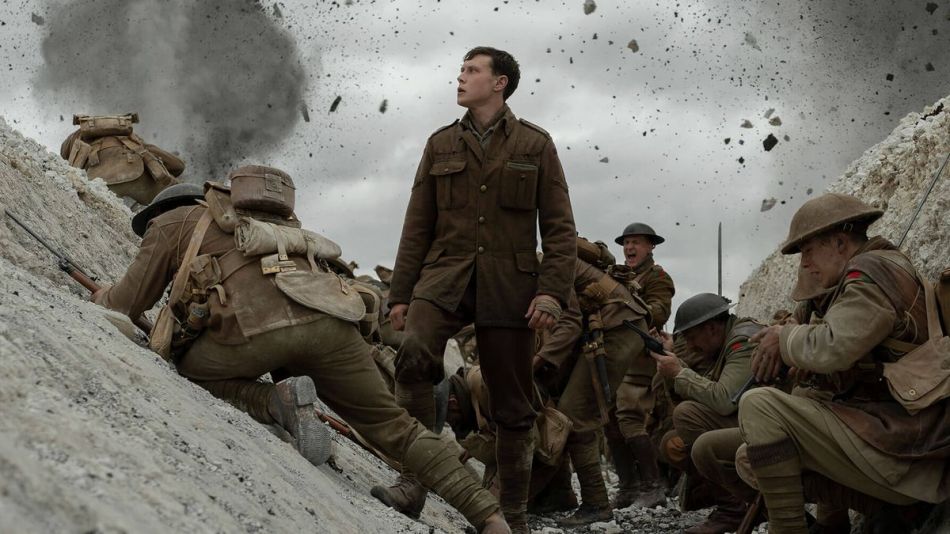 Following boys into battle has long been a fascination of Hollywood. All Is Quiet on the Western Front and Laurence of Arabia continue to sell the “war is hell” theme to modern audiences. While the stories and visuals of war films often create visceral reactions, its rare that the man behind the camera connects with the material. For Sam Mendes, the story of soldiers on the front line takes a more personal note. In 1917, Mendes tells the story of his grandfather and his time during World War I. The epic combines unprecedented visual prowess with unparalleled sound design to craft the best war film of the past decade. Yet its message of love, goodness, and doing the right thing in the face of an unfathomable challenge makes the film speak to the moment with its simple, yet incredibly profound message.

1917 begins on the frontlines of World War, as the Brits and the Germans battle in the trenches. Lance Corporal Blake (Dean-Charles Chapman) gets chosen for an assignment and must bring a second to complete the unknown task. He chooses his friend and fellow soldier Lance Corporal Schofield (George MacKay) to join him. The two meet with a general, discovering that a brigade of 1600 soldiers are walking into a trap. To further complicate matters Blake’s brother will be among the casualties. The two must reach the new front-lines and stop the attack.

The two young men at the center of 1917 add life and hope to the film. Chapman channels positivity and optimism that endears him to the audience. Meanwhile, MacKay showcases movie star looks and charisma. The two make an excellent pairing and their chemistry becomes undeniable. MacKay grapples with the raw emotion of the role. He combines movie-star looks and raw emotion to create buy-in for his journey. The frustration and desensitization he’s experienced can be felt, but with the brothers, he finds in war, he gives his life purpose. MacKay will be a star for years, and we’ll be talking about this turn for decades.

Mendes puts his all into the film, and his personal touch cannot be ignored. To execute this vision, he brought on the greatest living cinematographer, Roger Deakins. The two craft a visual spectacle that defies logic. 1917 attempts the one-shot trick that Birdman and Rope have successfully pulled off in the past. Deakins moves the camera to seemingly impossible places on the battlefield. His small visual glances and asides place the audience in the heat of the action, creating a voyeuristic sensation. The lighting gives him the opportunity to maximize shadows and flares to create unique visuals.

Yet with moments of clear editing, Mendes makes sure that the film cannot be defined by this single gimmick. Excellent editing from Lee Smith stitches together dozens of long takes with purpose. Earlier in the film, a soldier remarks that the days feel never-ending. The continuous shot amps up the tension but also serves this narrative purpose. There are no moments off in the war, and while the one-shot can feel uncomfortable at times, the battlefield is bloody. The sound work throughout the film places an emphasis on explosions and the riveting score from Thomas Newman.

Despite many grotesque and gory visuals, 1917 creates emotional arcs on the page. Mendes brought Krysty Wilson-Cairns on board to help with the screenplay, and you can feel her touch. After all, Mendes has never really been known for his work with the pen, and Wilson-Cairns spins yarns and dialogue that make the world come to life. The stories they tell and the choices they make matter. There’s an innate goodness in our protagonists, and they prove their heart through many challenges. For a world where some people seem hell-bent on destruction, 1917 feels essential.

1917 earns its place in the pantheon of great war films. Beyond the spectacle, the film creates beloved characters you’ll follow into the face of death. We see a future star begin his career, and a legend creates his masterwork. For Mendes, the film clearly represents a huge step forward, not only as a generational talent but as someone who tells extremely personal stories. Mendes reaches a new career-high and closed out the 2010s with a bang.

What did you think of 1917? Let us know in the comments below!

3 comments on “Review: ‘1917’ Explodes Into the Oscar Race Thanks to Roger Deakins, Outstanding Visuals and Sound”