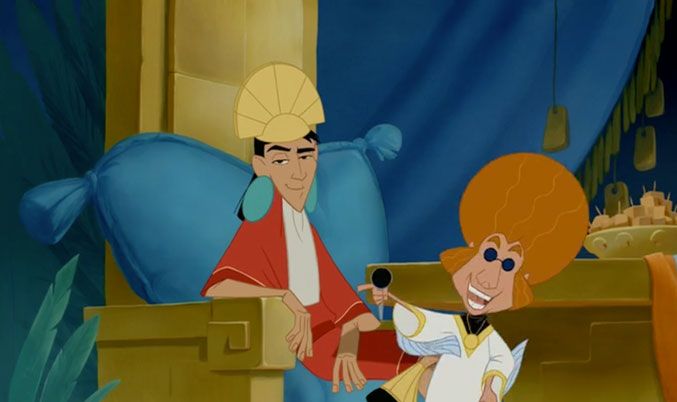 As Disney entered the new millennium, there were many questions about the future of its animation department. The Renaissance had ended, with Mulan, Hercules, and Tarzan yielding smaller returns. The rise of Pixar and Dreamworks began to challenge the studio’s stranglehold over the medium. Perhaps worst of all, a film had been stuck in development hell for half a decade. A little film known as Kingdom of the Sun had been struggling to make its release dates. A director of The Lion King had quit on the project and famed musician Sting struggled to write music to fit the consistent tonal changes. A disaster in every sense of the word, Kingdom of the Sun spelled doom for Disney.

Despite the neverending problems, a new director helped reorient the project. Despite reduced participation from Sting, new director Mark Dindal pieced together a buddy comedy. While earlier versions had included Owen Wilson running a “Prince and the Pauper” storyline with David Spade, Wilson and several others left the project. John Goodman and Patrick Warburton joined a cast that already featured Spade and Ertha Kit. The comedic energy instantly rebounded in the vocal performances, and Dindal’s team restarted the project and completed a new film in just over a year. The resulting film became The Emperor’s New Groove.

For the unaware, The Emporer’s New Groove follows the egocentric Kuzco (Spade) as he runs on everyone’s last nerve. Kuzco evicts a farmer, Pacha (Goodman), and a small town to make room for a waterpark. Kuzco’s most trusted advisor Yzma (Kitt) tries to kill him. However, thanks to a potion mixup by her assistant Kronk (Warburton), the young ruler transforms into a llama. His accidental escape and journey back to his throne requires Pacha’s help, and the two embark on the quest.

Beat for beat, Emperoror’s New Groove might be the funniest Disney film ever made. Spade and Goodman bounce idea after idea off each other. Their instantaneous chemistry can be felt throughout the picture. They are the lifeblood of the film and their mismatch creates dozens of great comedy bits.

Meanwhile, Kitt and Warburton steal the throne and the film. Kitt’s brilliance could not be understated as she tears into the dialogue. Her playfulness and zany attitude match Yzma’s pure absurdity. Furthermore, she brings grace and poise to the villainous role. Juxtaposed with Kronk, her assistant, the thrilling elements of Yzma’s plan comes into focus. Warburton leads his goofball insanity to the role, and you can feel the effort in every single line read. Warburton could do this in his sleep, but he nails the role.

Ultimately the silly and zany attitudes within the movie provide it with a levity that few other films featured. While other Disney movies had been comedic, they rarely committed wholeheartedly to the style. Unlike other Disney films, there are no real areas of drama to worry about. Reduced post-production and expedited release meant the film had to have all hands on deck.

Dindal kept the setpiece count down, but with each aside and tangential joke, The Emporer’s New Groove feels like it was born from the late 1990s. Almost like sketch-comedy, it’s quick-witted and focused on topical jokes. While many of these barbs will not make sense to younger audiences (such as a Lord of the Dance sequence), the joke-a-minute gag delivers. Shockingly, the film relies heavily on visual humor and background characters to sell even more gags. With some musical tendencies included within the story, the film feels more at home in a Monty Python show than the Disney Pantheon.

To this day, the humor of The Emperor’s New Groove makes it can’t miss comedy. While it was not a Renaissance film, Groove stakes a real claim on the most underrated title. Spade lives it up, and Goodman brings his lovable personality to the screen. Together the two pulled a little failure out of the dirt, and help to craft one of the funniest films in the entire Disney catalog.

What did you think of The Emperor’s New Groove? Let us know in the comments below!