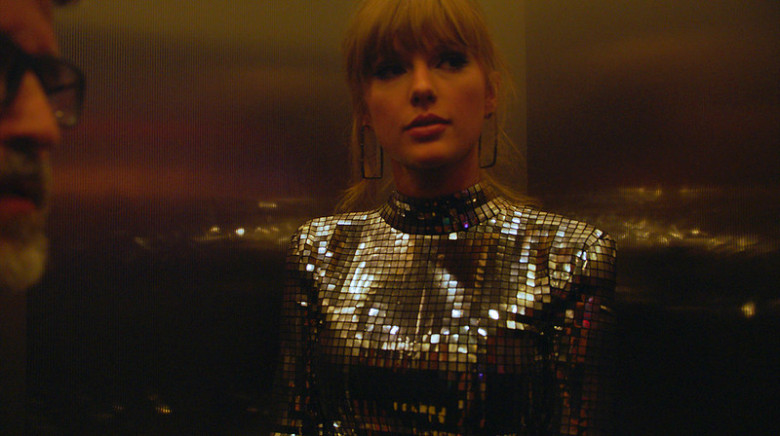 There are few more polarizing figures in American Pop Culture than Taylor Swift. The actress turned mogul and multihyphenate has taken the world by storm with her obsessive fandom. Her appeal ranges far beyond her musical roots in country music, making her one of the most bankable celebrities alive. However, her exposure across mediums makes her one of the most interesting cases of celebrity in the digital age. Whether you love or hate T-Swizzle, there’s plenty to explore about her. Miss Americana opened the Sundance Film Festival in 2020 and has already landed on Netflix. The resulting feature, made in participation with Swift, chronicles her rise and current place in the culture. While it conveniently skips over many of her most controversial aspects, the film creates empathy for a star that many have written off.

Miss Americana follows Taylor as she navigates her current role in the culture. It walks us through her fights with Kanye, as well as her rise to superstardom. We get a peek at her creative process, watching her collaborate with artists Brendon Urie and Jack Antonoff. The film dives into her psyche regarding women’s rights, her sexual abuse court case from 2017, and her political involvement in the 2018 mid-term elections. It’s a surprisingly emotional view of the performer that had been known for her hyper-calculated approach to entertainment.

Miss Americana is at its best when it attempts to contextualize Swift. She openly hopes to take a stand within gender politics discussions, hoping to empower women. Her counter-suing of David Mueller, who groped her while they took a photo, exposes a raw version of the pop star. It’s clear that the experience was traumatic, and she comes out the other side with a strong message of support for those who do not have her fame or proof for their cases. Later, her celebrity status gives her the opportunity to shape politics in some fashion. While the attempt was ultimately unsuccessful in the race she wanted to influence the most, her political display becomes a rallying cry for many. In these moments, as she fights with managers and staff, we see Taylor in a unique light that helps break part of her persona.

What Swift means to Millenials and Gen Z remains unclear. Miss Americana hopes to bridge some gaps by creating truly empathetic moments of personal strife. The real-time reveal of the 2018 Grammys snub stings, and you can feel the anguish coming through the camera. She openly discusses trying to manage relationships, even if she never hones in on specific people or events. Like you, she has trouble finding romance. Her emotional response to the mockery after the 2018 mid-term is humanizing. Her choice to pick herself back up and not retreat from future elections might be the most important. There’s plenty of dialogue about Millennial guilt over the election of Donald Trump. By taking up the cause, Swift inserts herself into the tradition of pop stars using their platform to create change. The fact this comes mere days before the Iowa primary is no coincidence.

On the flip side, there are plenty who will be cynical about the documentary. While the focus remains on Swift, it skirts past her social media fights with other artists, as well as her celebrity relationships. Whether she wants to open up to fans or simply increase her currency in the political arena, Miss Americana portrays her as a young progressive with power. While her unique role as a pop star who emerged from the Country music scene gives her the ability to survive fans leaving her side, many of her stances come from a place of privilege. The film struggles to communicate this point, even if realizing that privilege is what allowed Swift to take her stand.

Surprisingly, Miss Americana executes a focused paradigm shift of the pop star. There are plenty of things that Swift does that help progressive causes that should be cause for celebration. However, those who doubt her intentions have plenty of evidence to point towards. The benefit and drawback of making a documentary of a pop star while she’s still in her prime is that the rest of the story has not been written. There will be more highs and lows for Swift, even if she continues her status as a generational talent. Still, Miss Americana works as a first foray into an open Taylor Swift, and if she continues to hold dialogues like the ones on display here, it could point to a far brighter future than one could have imagined a decade ago.

What did you think of Miss Americana? Let us know in the comments below!